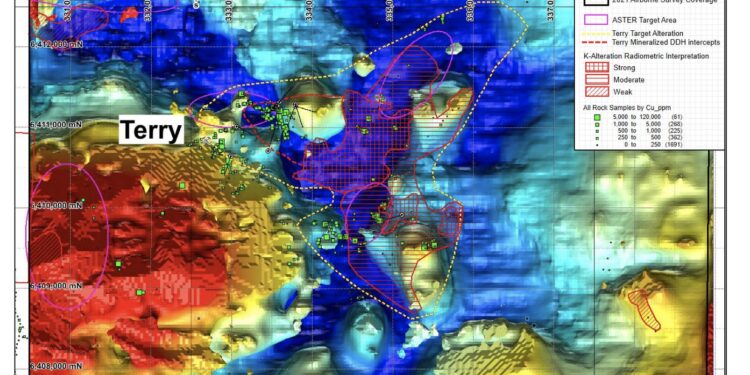 In addition, Libero Copper has completed the interpretation of the detailed airborne magnetic and radiometric survey data over the Terry porphyry Cu-Au discovery area.

Processing of the radiometric data has identified of a large, four by four by four-kilometre triangular shaped area with a strongly elevated potassic alteration signature located immediately southeast of the Terry porphyry Cu-Au discovery.

This target area will be the focus of the drill programme scheduled to begin in mid-July and is intended to follow up on the previous mineralized drill intercepts from the Terry porphyry Cu-Au discovery (i.e. 120 metres of 0.41% CuEq1 (0.34% Cu, 0.06 g/t Au, 2.47 g/t Ag) from surface.)

“We are excited to be kicking off the summer field season at Big Red. The exceptional target area identified southeast of the Terry area may represent the source for the hydrothermal system feeding the Terry porphyry discovery. We are providing the team with all of the technology necessary for a successful field season and look forward to drill testing this target,” President and CEO, Ian Harris, said.

Daniel Core, PhD., of Fathom Geophysics, was contracted by Libero Copper to process and interpret the geophysical data. The main products generated include a magnetic vector inversion model, radiometric filter models to identify potassium alteration, structure detection filtering, and interpretations of the lithology, structure, and alteration in the area.

The main outcomes and conclusion from this geophysical interpretation are as follows.

•    A four by four by four-km triangular shaped area with a strongly elevated potassium enrichment has been identified in the radiometric data immediately southeast of the Terry porphyry Cu-Au discovery and may represent the source of the hydrothermal solutions responsible for the mineralisation in the Terry area.

•    This large triangular potassium enrichment anomaly is generally oriented in a northeast direction and is coincidental with a large northeast trending magnetic low and a series of small syenitic intrusions that have been mapped along this trend (each is less than one km diameter) classified as the Lower Triassic age Galore Plutonic Suite.

• The previous drilling at the Terry area intersected significant intervals of Cu-Au mineralisation however they were drilled approximately 500 m northwest of the area identified as the margin to the strong potassium response (alteration).

•  Three additional areas have been identified with elevated potassic response within the 2021 magnetics and radiometrics survey area which require follow-up.

•  Follow-up drilling this field season will focus on testing this area to identify the hydrothermal source responsible for the mineralisation in the Terry area.

Re-evaluation of the ASTER satellite alteration mapping was performed, and a number of targets have been identified.