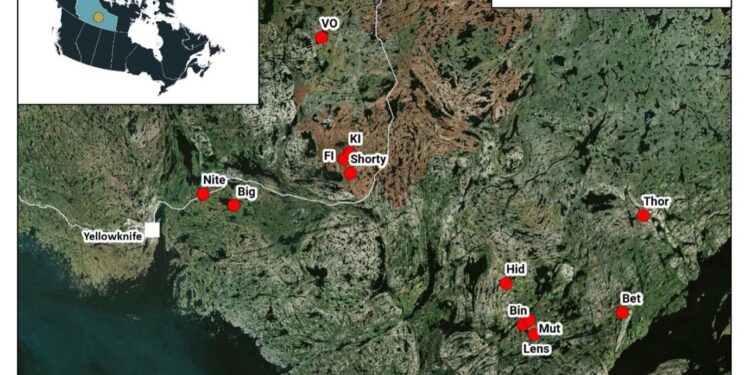 Li-FT Power Ltd. (CSE: LIFT) has entered into an amalgamation agreement with 1361516 B.C. Ltd, a private company holding a 100% interest in the Yellowknife Lithium Project in Canada, whereby the company will acquire all of the issued and outstanding shares of the Target.

The Yellowknife Lithium Project is comprised of mineral leases that cover the majority of the lithium pegmatites that make up the Yellowknife Pegmatite Province (YPP). The YPP has been noted to be one of the largest lithium resources in the Western world.

Numerous spodumene-bearing pegmatites with strike lengths up to 1,800m and widths up to 40m outcrop in a spectacular fashion within the Project and are plainly visible from satellite imagery. The YPP also benefits from excellent existing infrastructure, including roads, rail and a skilled labour force that could support the development of this project.

“The Yellowknife Lithium Project is a tremendous opportunity to consolidate numerous lithium pegmatites that have the potential to be one of the largest hard rock lithium resources in North America,” CEO, Francis MacDonald, said.

“The Project was held privately for 35 years without having any exploration work completed at a time when lithium was not an exciting commodity. We look forward to completing an aggressive drill program to delineate the subsurface extent of the abundant lithium mineralization we see at surface.”

The Yellowknife Project contains 14 different lithium pegmatite systems, most of which are visible in satellite imagery. Historic channel sampling has produced average grades from 1.10 – 1.59% Li2O over widths of seven to 40m. Strike extents of pegmatites visible on surface are 100 to 1,800m.

The company plans to initiate an aggressive drill program once necessary permits are received to advance the Yellowknife Project towards a maiden resource estimate.

Lithium mineralization hosted in spodumene-bearing pegmatites of the Yellowknife Pegmatite Province (YPP) was first discovered in the 1940’s and intermittently explored through to the 1980’s. Canadian Superior Exploration Limited (CSEL), the exploration arm of Superior Oil, completed systematic mapping, spodumene crystal counts, blasting-trenching, channel sampling and diamond drilling in the area from 1975 to 1979. CSEL estimated an overall resource potential for the YPP of 49 million tons at an average grade of 1.40% Li2O1 (calculated to a vertical depth of 152m) of which 75% is located within the Yellowknife Project.

In addition to the Yellowknife Project, the Target holds the Cali lease located in the Little Nahanni Pegmatite Field in the MacKenzie mountains in Northwest Territories near the Yukon border. The Little Nahanni Pegmatite Field has been noted to have greater than 275 complex rare element pegmatites over an area of 13 by 2.5 km. CSEL also held the Cali pegmatite in the 1970’s which subsequently was acquired during the portfolio acquisition in 1983.

The Cali pegmatite was mapped by CSEL in 1977 and was described as outcropping over a 500m strike length, having a 300m outcropping vertical extent, and having up to 100m width. Panels of metasedimentary country rock occur within the spodumene-bearing pegmatite which has been described to have 60m of pegmatite dyke material. Float mapping suggests that the lithium-bearing dyke could be up to 1,200m in strike length.