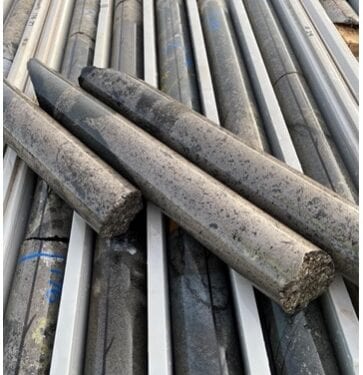 “The distance between these holes and the discovery zone, along with the developing story from downhole EM surveys, continue to demonstrate a very large system driving Mawson, which is consistent with the potential of a significant deposit.”

A total of four further diamond drillholes have been completed (RKDD037, RKDD042, RKDD043 & RKDD044), with drilling of RKDD045 in progress at the time of writing

Mr Wilson said this bodes well for continued selection of targets to test for the preferred host lithologies and structurally favourable positions to host massive Ni-Cu mineralisation across the Mawson intrusion.

Diamond drillhole RKDD043 has been completed 200m west of RKDD041, targeting an interpreted south-west extension of the eastern chonolith,

RKDD043 intersected a metasedimentary package from 52.3m to 79.7m before intersecting a variably mineralised gabbronorite with interleaved metasediments, anorthosite, and pegmatitic zones from 79.7m to 263.3m downhole, a total mineralised zone of over 180m in thickness.

Textures of the sulphides across these zones indicate remobilisation of sulphide, suggesting the drillhole has not intersected the primary sulphide source.

DHTEM has been completed on RKDD043 with in-hole and off-hole conductors identified, interpreted to be extensions of the massive and semi-massive Ni-Cu sulphide mineralisation encountered in-hole. Diamond drilling is planned to test these conductors.

Hole RKDD044 was drilled 200m north of RKDD042, off the north-eastern end of the Eastern Aircore Geochemical Anomaly (EAGA), targeting the north-eastern interpreted extension of the eastern chonolith. The drillhole intersected a weakly mineralised gabbronorite from 92m to 381m downhole before intersecting a meta-BIF and orthogneiss assemblage to 403.2m. The drillhole then entered an interpreted marginal early-stage recrystallised gabbronorite to 437.9m before intersecting a heavily mineralised gabbronorite to 476.75m. A zone of net-textured, semi- massive, and massive Ni-Cu sulphide was intersected from 453.2m to 458.1m. DHTEM is now scheduled for RKDD044.

This discovery of massive Ni-Cu sulphide is 1.2km north-east of the Mawson discovery zone.

RKDD044 in addition to RKDD043 (over 1km to the south) delivers the first visual confirmation that the Mawson intrusion displays the ability to host multiple accumulations of massive Ni-Cu sulphide.

The drill traverse of RKDD044 will be extended east, west, and north with planned diamond drilling.

Hole RKDD037 was re-entered and extended to a depth of 513.2m. This is the western hole on a drill section including RKDD039, RKDD040 and RKDD042 targeting the north-east untested portion of the EAGA.

RKDD037 intersected a package of meta-BIF and metasedimentary units to 307.95m downhole before entering a thick package of prospective gabbronorites with disseminated and blebby magmatic sulphides from 307.95m to 476.26m downhole, before finishing in a metasedimentary package.

Additional drilling is planned west of RKDD037 to target the prospective intrusive package and associated mineralisation, below the depth penetrative capabilities of surface MLTEM/FLTEM. DHTEM has been completed and modelling is pending. 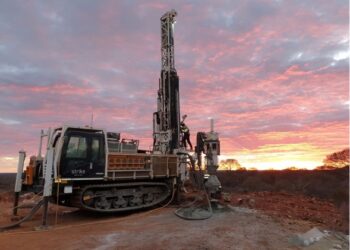