Lefroy Kicks Off Drilling At Burns 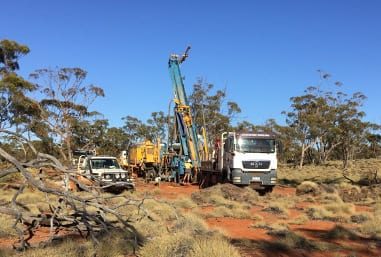 The hub contains tenement E15/1715 that covers an area of approximately 20 sq. km containing the Burns gold-copper prospect that was discovered by Octagonal Resources Limited in 2011.

“We are excited to be drilling at Burns subsequent to the tenement grant in September 2020 and the heritage survey in November 2020,” Mr Johnson said.

“We continue to grow the target portfolio at Eastern Lefroy and are very keen to complete this drill program at Burns that could deliver a very significant resource.”

The Burns gold copper prospect is situated on the eastern margin of a large interpreted felsic intrusion, termed the Burns Intrusion. The intrusion does not outcrop and has is represented by a distinctive annular aeromagnetic and gravity geophysical signature.

In 1985 BHP recognised an annular negative magnetic feature at the time interpreted to represent a carbonatite intrusion. Two diamond drill holes were completed near the margin of the intrusion, one of which intersected abundant magnetite and porphyry intrusions.

The area was then identified as a priority exploration target area for greenstone hosted orogenic gold mineralisation based on targeting parameters developed by Western Mining Corporation (WMC) in the 1990’s. Aircore drilling by WMC targeted the northwest and southeast margins of the Burns Intrusion with wide spaced aircore drilling, including drilling in Lake Randall. This drilling returned anomalous gold results that included 2m @2.67g/t Au in hole SAL746 at the Neon prospect on the north west margin of the intrusion,

During 2007 to 2010 Newmont Australia recognised the geophysical character and gold prospectivity of the area from regional targeting and completed wide spaced aircore drilling.

In May 2011 Octagonal Resources Limited discovered significant gold and copper anomalism in the regolith (weathered rock) from aircore (AC) drilling. This defined a one square kilometre area of gold anomalism and a two-km-long copper anomaly on the north eastern margin of the Burns Intrusion. This initiated subsequent multiple programmes of reverse circulation (RC), diamond drilling (three Holes) and geophysical surveys during the period 2012-2016. The drilling intersected broad zones of gold (Au) and copper (Cu) associated with magnetite-biotite alteration and hosted in high-magnesian basalt and intermediate intrusive rocks.