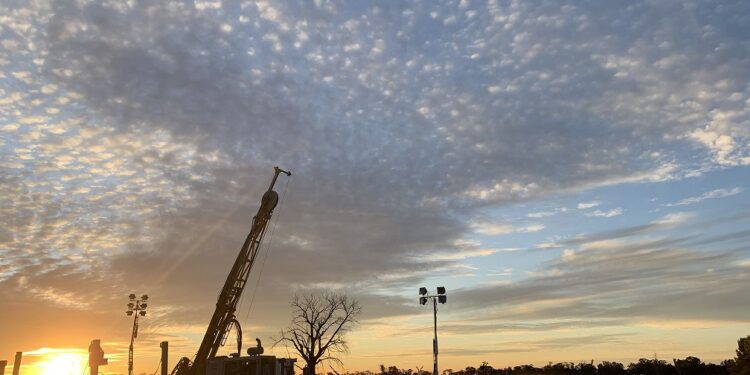 “We eagerly await assay results for the remainder of the hole. TRDD029 opens up a significant search space south, east and west of previous drilling.

“This hole has further confirmed and expanded a very large mineralised system at Trundle Park that hosts the potential for a cluster of higher-grade skarn and porphyry intrusion bodies.

“Despite recent rain, good drilling metres are being achieved. Ongoing hole TRDD030 will provide a better understanding of the new large mineralised zones returned in TRDD029 and coverage of the previously untested southern strike of the currently defined ∼1.3 km mineralised system at Trundle Park.”

Hole TRDD029 followed up the nearer surface intrusion potential recognized in TRDD028 in December 2021. It was also designed to test the western and southern strike for both skarn and porphyry type intrusion mineralisation at depth in a region of very limited deeper drill coverage (one hole) situated across a magnetic low, the eastern shoulder of a moderate magnetic zone and along strike from the existing mineralised corridor at the Trundle Park prospect.

While nearer surface intrusions are observed to occur from surface and continuing westwards, they comprise:

There is also a second stage of copper development noticed with bleb-like chalcopyrite occurring in a retro-grade skarn stage with carbonate (both iron-carbonate and calcite) along with orthoclase (orange K-feldspar) and hematite (specular and bladed).

The retrograde skarn stages tend to fill in voids (i.e., as matrix fill between breccias) and also along crosscutting veins throughout the earlier prograde skarn stages. The Middle Skarn zone is interpreted to host the more elevated levels of this second stage of copper development relative to the Upper Skarn.

Furthermore, there are examples in hole TRDD029 where chalcopyrite can be observed in both the prograde and retrograde skarn stages, providing at least two identified pulses of fluids with copper bearing sulphides within the skarn.

Above the skarns and below the afore-mentioned intrusions, porphyritic andesite lava flows were noted with increasing silicification along with epidote-chlorite-hematite alteration at depth, in-turn cut by later carbonate quartz veins and/or as matrix fill along fractures with chalcopyrite.

The last reported quarters’ production from Cadia (from Cadia East) mined a head grade of 0.82 g/t gold and 0.35% copper (1.41 g/t AuEq) with an all in sustaining cost margin of A$1,519/oz. This illustrates the favourable economic potential of bulk mining operations in the Macquarie Arc at not dissimilar depths to these mineralised zones in TRDD029.