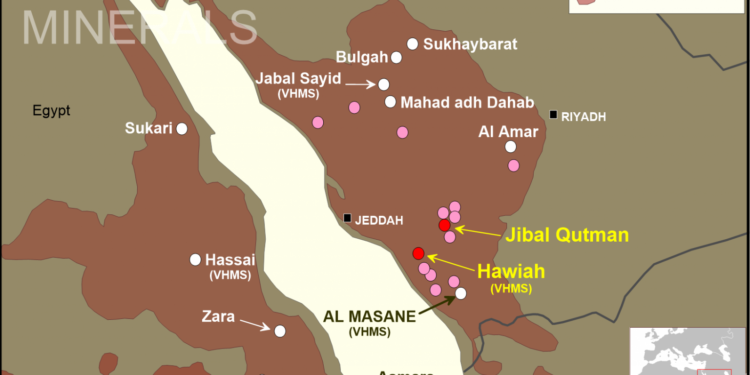 KEFI (AIM: KEFI), the gold and copper exploration and development company with projects in the Federal Democratic Republic of Ethiopia and the Kingdom of Saudi Arabia, has provided an update on the company’s Gold and Minerals Limited (G&M) Hawiah Copper-Gold Project and Jibal Qutman Gold Project in Saudi Arabia.

G&M is owned 30% by KEFI and 70% by its partner Abdul Rahman Saad Al Rashid and Sons Ltd (ARTAR).

“In Saudi Arabia, we now have two development projects in progress after being held up for many years awaiting a regulatory overhaul,” Executive Chairman, Harry Anagnostaras-Adams, said.

“We are looking to develop our Jibal Qutman Gold Project and then to follow with the start-up of the Hawiah Copper-Gold Project. Both projects are growing, but already in the feasibility study stage and, combined, the KEFI interest therein is already projected to exceed that of the company’s Tulu Kapi Gold Project in Ethiopia in terms of NPV and cash flow generation.

“Drilling at Hawiah during 2022 should not only further grow the copper-gold resources but also upgrade the classification to the confidence required for mine planning in the PFS, to be completed by the end of this year.

“Drilling at Hawiah and the nearby Al Godeyer Prospect is also targeted to provide additional near-surface oxide gold resources to be mined first in open pits, expediting first revenue, prior to the underground mine and base metal processing facility being developed.

“With recent encouragement from the Saudi Government, Jibal Qutman is likely to be developed first as KEFI has already commenced work to update the PFS completed in 2014. The preferred development approach for Jibal Qutman is now likely to be a straight-forward CIL gold processing plant, at a larger scale than previously envisaged, as the economics for mining and processing the whole resource now are much more robust at the higher current gold prices. Another important consideration is that project financing in Saudi Arabia will not require foreign banks and that Jibal Qutman will not require the resettlement of communities.

“Our teams in Saudi Arabia and Ethiopia are all working hard towards potentially developing both Jibal Qutman and Tulu Kapi in 2023 and then Hawiah shortly afterwards.”