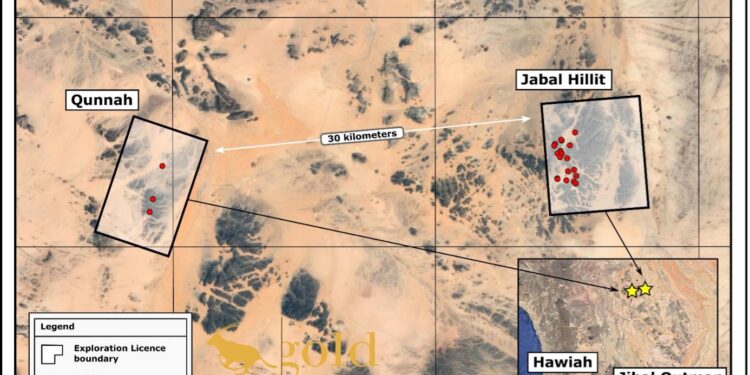 KEFI (AIM: KEFI), the gold and copper exploration and development company with projects in the Federal Democratic Republic of Ethiopia and the Kingdom of Saudi Arab, has been awarded two additional exploration licenses through the company’s Gold and Minerals Limited (G&M) joint venture in Saudi Arabia. G&M is owned 30% by KEFI and 70% by its partner Abdul Rahman Saad Al Rashid and Sons Ltd (ARTAR).

Mineralisation within the Exploration Licences presents as north-west trending gold-bearing, structurally controlled quartz veins. Work conducted during the Bureau de Recherches Géologiques et Minières (BRGM) and United States Geological Survey (USGS) reconnaissance programmes of the 1970s and 1980s, remains the only modern exploration to have taken place over the sites, with basic mapping and rock chip sampling confirming the presence of high-grade gold mineralisation and outlining the key areas of interest.

Jabal Hillit represents the more advanced licence with 20 mapped gold occurrences across five main vein packages cutting across the licence. Veins have been shown to strike discontinuously for 1,500m with widths of up to 2.5m, hosted within meta-volcanic units. USGS mapping also rediscovered the ancient ruins of the Umm Adher gold mine, which now sits inside a fenced archaeological site within the licence area. BRGM sampling of dump piles associated with this ancient mining showed gold grades of up to 15.3 g/t.

Located 30km west of Jabal Hillit, the Qunnah exploration licence area also presents with gold-bearing, structurally controlled quartz veins within three main areas. As with Jabal Hillit, large crush and dump piles can be found across the tenement with ancient miners clearly targeting the quartz-vein gold mineralisation. USGS sampling of vein material from these crush dumps reached up to 46 g/t of gold.

The G&M regional exploration team are gearing up for a busy summer of mapping and sampling within these new licences to ground truth historical data, extend the known limits of mineralisation and define the structural framework controlling mineralisation, ahead of more advanced exploration works this year.

ARTAR (on behalf of G&M) has been actively engaged in discussions with the Saudi Arabian Ministry for Industry and Mineral Resources (MIM) regarding its mining licence application. These discussions have now reached an advanced stage and it is the view of G&M’s management that a positive outcome to these discussions is now imminent.

In line with these discussions, G&M will need to submit an updated Development Plan and Environmental and Social Impact Assessment to enable the resubmission of the mining licence application under the new Saudi Arabian Mining Investment law, ahead of the award of the expected Jibal Qutman Mining Licence (ML).

In advance of this, it is anticipated that G&M will be granted three exploration licences covering the Jibal Qutman area to enable the above studies to be completed.

As announced on 16 June 2022, G&M has engaged Lycopodium to complete a Detailed Feasibility Study (“DFS”) for Jibal Qutman by December 2022. In addition to this, the Company has initiated steps to re-establish its operational base in the nearby city of Bisha.

“Work in Saudi Arabia is gathering pace on many fronts; our Hawiah Project is firmly on track for the delivery of the Preliminary Feasibility Study by year end, we have exciting developments on the Jibal Qutman Gold project and now the granting of these two additional exploration licenses. The award of the exploration licences, which contain known high-grade gold occurrences provides an exciting opportunity to make further discoveries at a time where the country is focused on developing its mineral resources,” Executive Chairman, Harry Anagnostaras-Adams, said.

“This expansion of our regional exploration portfolio highlights our commitment to organic growth and our desire to discover and develop additional assets in the highly prospective Arabian shield. At Jibal Qutman, developments are particularly encouraging and should allow for a fast-track development schedule, targeting near term gold production. This marks the beginning of an exciting chapter for the G&M joint-venture partnership and continues to demonstrate our ability to operate as a leading explorer and developer within Saudi Arabia.”