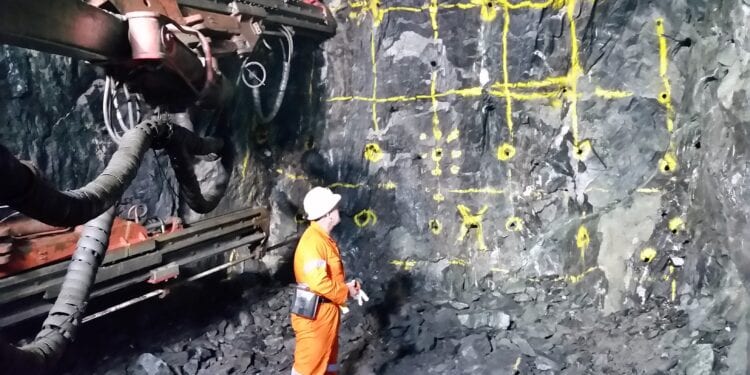 The holes are part of the Phase 1 drill programme targeting strike extensions of approximately 250 metres from the 1235 Level development drive in addition to up-dip and down-dip step-out drilling. The Judd vein system is located near-mine infrastructure, subparallel to and ~150-200 m East from the producing Kora deposit and within the mining lease.

To date, four known veins have been recorded at Judd, with similar vein orientation and quartz-sulphide Au-Cu-Ag mineralisation as Kora. Similarly, the veins are essentially quartz/sulphide with brecciated country rock fragments or massive sulphide (dominated by chalcopyrite), or combinations of both styles. The veins remain open at depth and only a fraction of the over 2,500 m strike length has been drilled, with significant gaps remaining to be tested.

Significant intersections have been recorded from the first total four diamond drill holes reported at Judd from the Phase 1 underground drill programme.

CEO, John Lewins, said there are currently two drill rigs testing the Judd vein system, with drilling of hole JDD0005 underway by the second drill rig. The J1 vein bulk sample on the 1235 Level also remains underway, with the plan to report results upon batch processing the material.

“We are extremely pleased with the first set of results from our Phase 1 underground drill programme at Judd, delivering high-grade, solid thicknesses and similar mineralization to our producing Kora deposit,” Mr Lewins said.

“With only a fraction of Judd’s 2.5 km known strike length sparsely drill tested, we are very excited about its exploration potential. Exploration activities are ramping up, with nine drill rigs currently operating at Kainantu, and increasing to ten by year-end.

“By year-end, we expect to be drilling the Karempe, Kora, Kora South and Judd vein systems plus the Blue Lake porphyry concurrently. Preparations to increase the number of drill rigs in 2021 are underway.”

The Case For Silver Investment