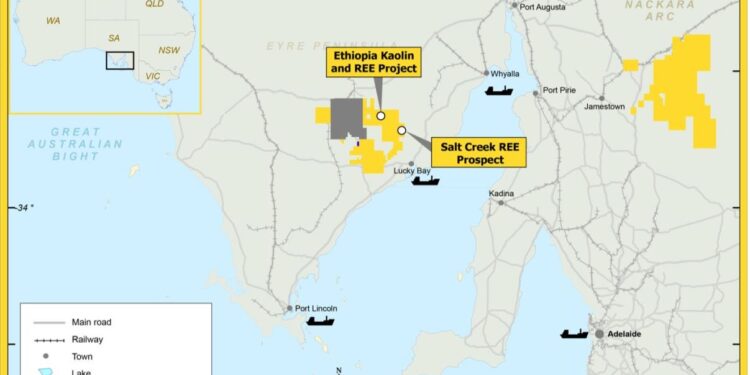 The rare earths display significant enrichment of neodymium and praesidium (~23% Nd+Pr), which are critical in the production of permanent magnets for electric vehicles and renewable energy.

Drilling was undertaken by Archer Materials in 2011 while exploring for manganese and returned significant REE results including:

“The Salt Creek Prospect confirms the prospectivity of the Eyre Peninsula for REE. With over 1,400km2 of ground in the region, and a huge amount of historical data from Archer Materials to guide us, we are in a very strong position to capitalise on this potential,” Managing Director, Mike Schwarz, said.

A detailed review of historical data, from drilling undertaken by Archer Materials Ltd in 2011, identified thick intervals of up to 32m of REE rich, clay dominant material, over an area extending over 1 km in a north-south direction.

Results from this work will help guide the company’s upcoming drilling programmes to focus on known areas of mineralisation.

The 2011 Archer Materials drilling programmr was targeting manganese rich horizons within Paleoproterozoic Hutchison Group Metasediments. As a matter of good process, they also undertook multielement analysis including the full suite of REEs.

At the time IAC REE mineralisation was relatively unknown outside of southern China and the demand for REE were not as strong as today, so the implications were not fully realised. With limited success finding manganese mineralisation at Salt Creek the project was mothballed.