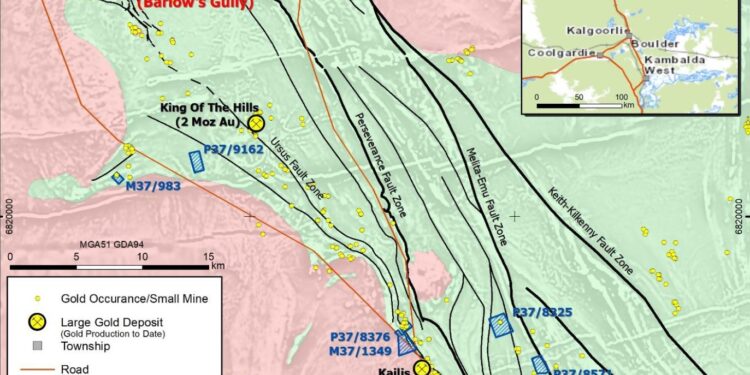 The Barlow’s tenement (P37/8278) is located in the Leonora Gold Mining District of the Central Goldfields. The project lies within an Archaean greenstone belt along the Ursus Fault Zone, which is also host to several significant gold deposits along strike to the SSE, such as King of the Hills and Kailis.

Numerous historical shallow workings and prospecting pits occur at Barlow’s. Until Infinity’s involvement, the licence was held in private hands for many years and has not seen any modern-day exploration.

Infinity carried out reconnaissance geological mapping and a rock chip sampling programme across the Barlow’s tenement in early 2022. A total of 8 rock chip samples were collected, largely from quartz veins at surface. Three of the eight rock chip samples returned high-grade gold assays over 1 ppm Au, with the highest assay being 15.495 ppm Au.

After confirming high-grade gold in surface rock chip samples, a program of aircore drilling was completed by Infinity on the eastern side of the Barlow’s tenement where some alluvial cover is present overlying the Archean greenstones.

A total of 194 aircore holes were drilled along 150 m to 200 m spaced North-South lines, with drill sites every 25 m spacing along the lines. Holes were inclined at 60 degrees to the north, roughly perpendicular to the bedding foliation, and drilled to the Archaean greenstone basement.

Drill hole depth ranged from 1 to 22 m. At each drill hole, a 1.0 m thick, end of hole sample was collected for analysis.

A soil sampling programme was then completed by Infinity on the western side of the Barlow’s tenement, where cover is thinner and basement outcrop is partially exposed.

Soil samples were collected along 100 m spaced North-South lines, with a sample collected every 50 m along each line.

A total of 220 soil samples were collected largely from the C-horizon soil layer.

The aircore samples were submitted to Jinning Testing Laboratory in Kalgoorlie, and the soil samples were submitted to ALS Kalgoorlie for gold analysis by fire assay. Details of these programs are included in a JORC (2012) Table 1, attached with this document. Gold assays for the aircore drilling and soil sampling programs returned highly anomalous results up to 0.681 ppm Au.

‘’The Infinity team is very encouraged by the recent positive results of our exploration work at Barlow’s Gully, which lies along strike from several major gold deposits in the Leonora District,” CEO, Joe Groot, said.

“The company is looking forward to drilling underneath these large surface gold anomalies, as part of its search for structurally hosted gold mineralisation in the Central Goldfields of WA.”