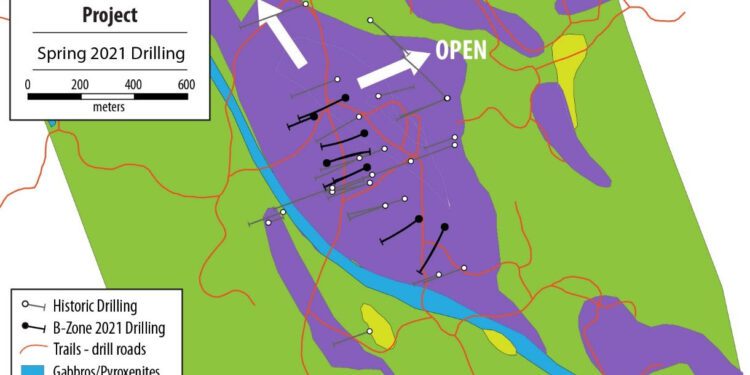 Drilling has intercepted wide intervals of nickel-bearing ultramafic rocks in each of the five holes reported to date. The holes cover ~700 metres of the strike length of the B Zone bulk tonnage nickel sulphide target located within a >2km long serpentinised ultramafic complex in the northern part of the Property.

The focus of the 2021 reconnaissance drill programme was to further test the potential of the B Zone to host a large (e.g., >100 million tonnes) resource of near surface, bulk tonnage secondary nickel sulfide mineralization analogous to that observed in the Crawford nickel deposit owned by Canada Nickel Company.

Drill holes GBN21-01, 04, 06 and 08 along with GBN21-01, previously reported, all intersected wide intervals of elevated nickel grades associated with serpentinised ultramafic rocks belonging to the Northern Ultramafic Complex. In general, the highest observed nickel grades from the 2021 drilling in the range 0.30% to 0.50% Ni are associated with the highest observed sulfur values – generally above 0.10% sulpur.

For reference, previous metallurgical testwork completed for the Company by SGS Laboratories (2003) on a composite sample grading 0.33% total nickel and 0.10% sulphur noted that a majority of the nickel in that composite was associated with heazlewoodite, a secondary nickel sulphide mineral containing ~74% nickel. The SGS study also indicated potential nickel concentrate grades of up to 35%.

The current drill holes, and in particular hole GBN21-04, suggest that higher grade nickel mineralisation may extend well to the east of this anomaly toward the eastern margin of the >2 km long and up to 800 metre-wide Northern Ultramafic Complex, thereby opening up a much larger area for future exploration.

Next Steps at Bannockburn

Following the receipt of all assay data, the company plans to complete:

(1) Quantitative mineralogical analyses on a new bulk composite sample that is representative of the 2021 drilling results in order to determine the amount and type of sulpide nickel mineralisation that is present. Additional metallurgical testwork is also being contemplated to confirm and expand on the SGS 2003 study findings in terms of expected nickel concentrate grades for the B Zone.

(2) Additional exploration drilling to establish the total strike length, width and tonnage potential of the B zone, which remains open to the north and south along strike, and to the east, across strike.

“Results from our 2021 B Zone exploration drilling programme at Bannockburn are encouraging as we continue to firm up the potential for a large, bulk tonnage, open pit nickel sulphide resource,” Dave Peck, the Vice President Exploration for Grid, said.

“Our planned quantitative mineralogical analysis of selected samples from the 2021 drill programme will commence shortly. The results from this work will be critical in delineating areas of enhanced concentrations of secondary, high-tenor nickel sulphide mineralisation and will allow us to focus the next phase of drilling and metallurgical testwork on these areas.”

Grid is also evaluating the potential for developing higher-grade nickel resources in both the northern and southern ultramafic complexes at Bannockburn. There are three known Kambalda-type nickel sulphide zones (massive sulphides) on the Property, as well as several untested geophysical (EM conductor) targets that could represent additional nickel-rich massive sulphide zones. See the Company’s January 2021 Technical Report on the Property for more details.