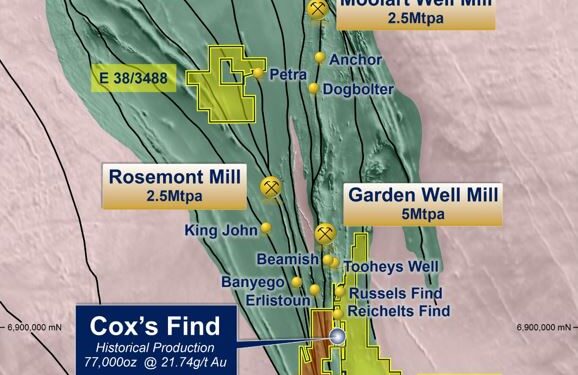 A two hole 319.5m DD program has been completed at Southern Star. The purpose of this drilling was to obtain further insight into the gold mineralisation at Southern Star, which is open to the north, south and at depth.

The two diamond holes were drilled 580m apart at opposite ends of the current known mineralisation, with the intention to examine the structural orientation of quartz veining, folding and foliation at the current extents of mineralisation.

“The structural analysis of the diamond core has given GSN the first visual insight to what the gold mineralisation looked like in core and what structural and alteration assemblages are key for future targeting.

“The results clearly demonstrate the significance and potential of the deposit given the noted similarities of mineralisation to the much larger million-ounce open pit and underground gold mine at Rosemount and to the Ben Hur Deposit, both along strike on the same regional mineralised structure.

“We remain very excited at the potential of Southern Star and the wider Duketon Gold Project for continued exploration success.”

Although only limited intercepts of significant gold (>0.1 g/t Au) were intersected (0.9m @ 0.16 g/t Au from 117.1m and 0.7m @ 0.11 g/t Au from 120.6m), it is interpreted to be proximal to the mineralised zone due to the similarities in the alteration assemblages. The remainder of the core is currently being cut and multi-element analysis is been undertaken on both diamond holes.