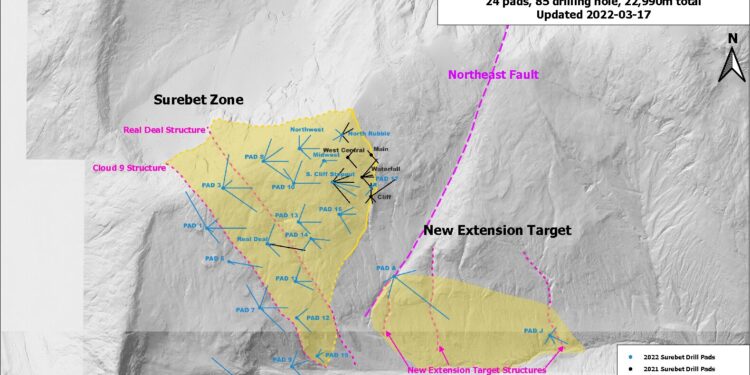 Goliath Resources Limited (TSXV: GOT) (OTCQB: GOTRF) has mobilised for its planned 24,000m diamond drill campaign on its extensive high-grade gold-silver discovery at its 100% controlled Golddigger Project in British Columbia.

It is designed for infill drilling as well as testing the outer extremities to depth at the newly discovered Surebet Zone. This new discovery is on tide water in a world class geological setting near Stewart, BC in the Golden Triangle of British Columbia. The Homestake Ridge Deposit and Dolly Varden Silver Mine and the Kinskuch Project are in close proximity.

Goliath has planned for a 24,000m drill campaign totalling 85 holes from 24 separate drill pads targeting the extensive high-grade gold-silver structure discovery exposed at surface at the Surebet Zone both along strike and to depth. The maiden 2021 drill campaign had a 100% hit ratio as all 24 holes totalling 5,332m intercepted significant widths of high-grade gold-silver over 1km of strike and confirmed 1.1km of down-dip extent.

“We are very pleased to have mobilised for our aggressive 2022 drill campaign at our newly discovered Surebet Zone,” CEO, Roger Rosmus, said.

“This new discovery has already demonstrated to be an extensive robust system that is structurally controlled down-dips 1.2 km confirmed by drilling in 2021. We have identified multiple strong drill targets focussed on significantly expanding the potential size of this system that remains open. The Golddigger property is in geo-political safe jurisdiction and key geologic setting where many world-class deposits have been discovered.

“The Surebet Zone potential has been compared to the past producing high-grade Silbak Premier Mine just to the north and certainly has the early makings of the next big discovery in the Golden Triangle. We look forward to reporting our drilling results with much anticipation.”

The Golddigger Property is 100 % controlled covering an area of 23,859 hectares (59,646 acres or 239 sq. km) and is in the world class geological setting of the Eskay Rift within the Golden Triangle, British Columbia and within two km of the Red Line that is host to multiple world class deposits.

The property is on tide water 30 km southeast of Stewart, British Columbia. The Homestake Ridge Deposit and Dolly Varden Silver Mine and the Kinskuch Project are in close proximity.