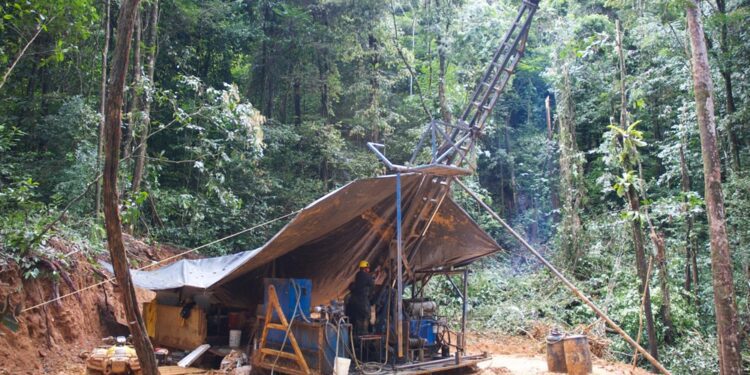 Newly reported results represent 43 core holes totalling 3,786m from the Zion and Bacchus areas, located in the eastern and northern locations of the Eagle Mountain deposit.

Year to date, the company has drilled 14,891m in 123 shallow drill holes and is 90% through the 2021 base programme of 16,500m. As the company is preparing for an updated Mineral Resource Estimate (MRE) anticipated later in 2021, the focus has been on infill and expansion drilling of the Eagle Mountain deposit, which is defined by a series of sub-horizontal mineralised zones that are laterally extensive and start at surface.

This drilling was designed to upgrade a significant portion of Inferred mineral resources to the Indicated category and to test for lateral extensions of the zones.

In terms of sequencing of drilling activities, the company has front-end loaded the infill and expansion drilling of the Eagle Mountain deposit in 2021 to prepare for the delivery of the MRE update in late 2021.

CEO, Steve Parsons, said that with these activities progressing well with respect to the objectives for the MRE update, drill results through the balance of the year will reflect a higher proportion of exploration drilling, which is also a primary objective of the 2021 drill program. This will encompass follow-up drilling of prospects along the Salbora-Powis structural corridor, including the Toucan Prospect where the Company recently intersected 6.0 metres (estimated true width (ETW) of 3.5m grading 18.14 grams per tonne (g/tr) gold starting 100.5m down the hole and testing of known geophysical targets.

Based on preliminary success with the Toucan Prospect and the presence of a number of high priority targets, management has approved an expanded scope for exploration drilling. The net result is an approximate 5,000m increase to the 2021 drill programme, bringing planned drilling to an estimated 21,500m

“We remain very pleased with the progress of the drill programme,” Mr Parson said. “The results are providing added definition to the near surface sub-horizontal mineralised zones of the Eagle Mountain deposit, showing continuity of mineralisation and expanding zones, at this time, in the Zion and Bacchus areas.

“Importantly, of the 83 infill, expansion and exploration core holes released so far in 2021, 88% have returned significant mineralised intervals with gold grades above the cut-off used in the February 2021 MRE. In the coming weeks, we anticipate releasing more infill and expansion drill results, specifically for the Baboon and Friendly areas of the Eagle Mountain deposit.

“With favourable progress on the infill programme, we look forward to shifting gears with the exploration program, specifically getting back to testing some of the new target areas and under drilled prospects such as Toucan and Powis, which sit adjacent to existing mineral resource but along a separate structural trend.”

Hanstone Gold Gets Go Ahead To List On OTCQB

Hanstone Gold Gets Go Ahead To List On OTCQB