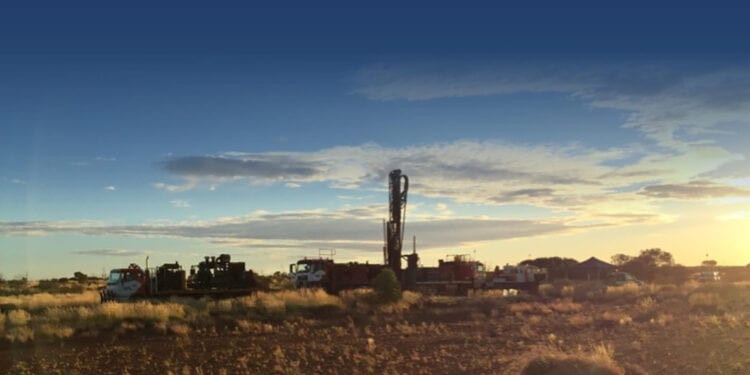 The results are part of an extensive programme completed at this cornerstone deposit in November 2020. The overall programme consisted of 47 holes for 5,239m, with holes drilled to systematically in-fill the existing Mineral Resource area on nominal 40m x 40m spacing.

In addition, nominal 60m spaced sections of RC holes were completed on the flanks of the Mineral Resource, tracing the host structure immediately along strike to the north and south of the existing Inferred Resource boundary for approximately 180m.

High-grade intersections were returned from several holes stepping out immediately to the south of the existing 120koz Montague-Boulder Mineral Resource, hosted within the moderately dipping, mafic volcanic hosted shear zone that hosts the majority of mineralisation within the Resource.

The intersections are located between 100m and 160m south of the A$2,400/oz optimal shell that constrains the existing Montague-Boulder Inferred Mineral Resource and indicate the potential for further extensions.

Managing Director, Peter Langworthy, said these outstanding new results provide further clear evidence of the extent of mineralisation within this shear system on the Northwest Margin of the Montague Granodiorite Dome. Recent RC drilling by Gateway has highlighted high-grade mineralisation in this position for up to 1.1km north of the Montague-Boulder Mineral Resource. The mineralisation intersected in holes GRC609 and GRC612 demonstrates that mineralisation continues to the south as well, and is open for a further 500m to the historical Caledonian Northeast open pit.

Preparations are underway for a new campaign of RC and diamond drilling at the Montague Granodiorite Dome.

Holes will be designed primarily to target further increases in the mineralised footprint identified on the Northwest Margin, including further testing of the newly discovered Lower Zone to the north as well as systematic drilling south of the Montague-Boulder deposit, toward the Caledonian Northeast pit.

A diamond drill rig will be utilised to complete four deep diamond holes to generate important lithological as well as structural geology data around the Montague Granodiorite Dome, allowing for an increase in understanding of the system and subsequent exploration for major gold mineralisation. Mr Langworthy said this drilling is to be part funded by the State Government of Western Australia, as part of its Exploration Incentive Scheme (EIS).

“Our excitement about the potential of the Northwest Margin of the Montague-Granodiorite, both north and south of the cornerstone Montague-Boulder deposit, has continued to build over the Christmas-New Year period with the receipt of these outstanding new results,” Mr Langworthy said.

“The key takeaway for investors is that this area is well and truly delivering on the ‘big picture’ potential that we have always seen across the Gidgee Gold Project. Step-out drilling to the south has delivered significant high-grade intercepts up to 160m south of the current 120koz Mineral Resource boundary, demonstrating the clear potential for the Resource to grow further in this area.

“Importantly, the location and orientation of these new zones is entirely consistent with our emerging interpretation of a continuously mineralised, moderately dipping shear zone along the Northwest Margin, which we also saw in the significant Lower Zone discovery made late last year some 1.1km to the north of the current Resource. We believe we now have a much better handle on what controls the mineralisation along this prospective horizon, which should help us to target the next phase of drilling,

“In addition, in-fill drilling within the current Inferred Resource has delivered results that also support our geological interpretation and which will support an upgrade to a portion of the Inferred Resource when we recalculate the Montague-Boulder Mineral Resource Estimate.

“We are now eagerly awaiting the final batch of assays from the pre-Christmas drilling, which is targeting the area around the Lower Zone discovery to the north. Once we have these results, we will launch into a major new program of RC and diamond drilling across the Northwest Margin in February 2021. This will include systematic RC drilling south of the Montague-Boulder Resource to flesh out the broader potential of this corridor, as well as deep diamond drilling that will help us to unlock the full potential of the Northwest Margin. “With a strong balance sheet and a clear understanding of where we need to go next, 2021 is set to be a really exciting year for Gateway shareholders.”