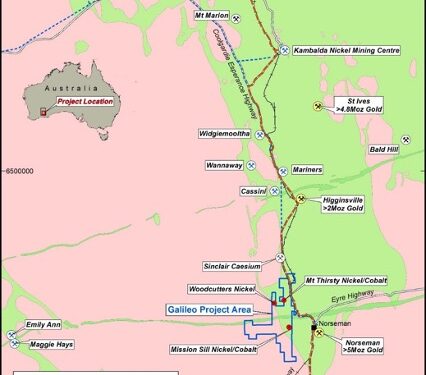 Galileo Mining Ltd(ASX: GAL) has defined a number of high priority targets with results of EM surveying at the company’s 100% owned Norseman project in Western Australia.

Interpretation of EM data shows that the sulphide occurrence in drill hole NAC105 is located at the confluence of two large and highly conductive bodies.

A separate conductive target has been identified on the southern margin of the Jimberlana Dyke with extremely high modelled conductivities interpreted to represent a significant source thickness. A coincident magnetic anomaly at this location adds support to the target.

Conductive EM targets can result from a variety of sources including economic nickel-copper-cobalt-palladium mineralisation, non-economic sulphides, graphite or sulphidic sediments. Drill testing is required to determine the source of the conductors identified at Norseman.

“The results of our EM surveying at Norseman are exceptional and, combined with the identification of sulphide in aircore drilling, we now have well developed targets ready for drill testing,” Galileo’s Managing Director, Brad Underwood, said.

“The sulphide in aircore drilling is just 52 metres below surface (60 metres downhole) and is immediately above the modelled conductors which start at 70 metres below surface. The location of the sulphide on the margin of a large ultramafic dyke is an excellent setting for the development of mineralisation and the EM models provide substantial weight to the target.

“Further to the main sulphide target we have identified another strong conductor on the southern margin of the Jimberlana Dyke at a similarly prospective location. The modelled conductor at this location is accompanied by a magnetic anomaly and starts between 20 and 40 metres below surface.

“All of the new EM targets can be readily tested with RC drilling due to their shallow depths. RC drilling is planned to commence after heritage surveying and statutory approvals have been received.”

The sulphide mineralisation in NAC105 was intersected on the northern side of target JD1 under alluvium and clay cover. JD1 occurs in the central position of the ultramafic Jimberlana Dyke where surface soil sampling identified maximum palladium values in soils of 0.81 g/t Pd while the maximum nickel recorded was 0.2% Ni.

Surface geochemical anomalism is associated with the outcropping Jimberlana Dyke layered intrusion. Prospective areas of the dyke to the north and south occur under shallow cover with soil sampling rendered ineffective due to the cover material. Aircore drilling was completed over these areas where cover prevented effective soil sampling.

NAC105 was drilled to a depth of 61 metres with the final metre intersecting fresh massive sulphide at the end of the hole. Aircore drilling in November 2021 identified sulphide mineralisation just 60 metres down hole with assays reporting prospective early results of 1.0 metre @ 0.24% nickel, 0.35% copper, 0.04% cobalt and 0.25 g/t palladium.

The host rock appears to be a mafic/ultramafic intrusion based on drill chips immediately above the sulphide. Drill holes to the south intersected ultramafic rocks and those to the north were logged as mafic/ultramafic at the end of hole.