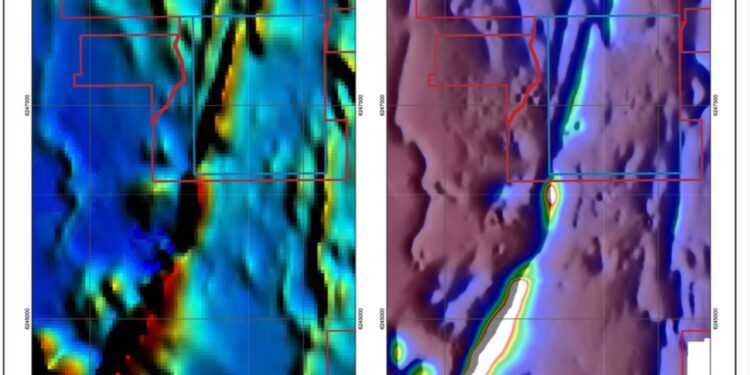 This survey provided high-resolution radiometric and magnetic data from a fixed-wing aircraft flying at an average of 45 metres of terrain clearance, a significant improvement for resolution over previous publicly available data sets.

Southern Geoscience Consultants (SGC) provided processing and interpretation of this new data as well as the development of key target zones for lithium-bearing pegmatites. Target generation incorporated structural and lithological information (provided by the airborne data), as well as field mapping and surface geochemistry undertaken by Galan.

The new magnetic, radiometric and DEM data gives more precision to the location of the mineralising Donny-Brook Bridgetown Shear Zone (DBSZ), associated with the Greenbushes pegmatite.

Galan has initiated a soil sampling and field mapping program over the first of the newly identified targets on E70/4790.

Field mapping activities over the GS11 target area revealed an outcrop of approximately 200 m long by 40 m wide pegmatite. This pegmatite has similar macroscopic mineralogy to those pegmatites described at the Greenbushes Lithium Mine to the north.

The assemblages are albite-quartz ± microcline ± muscovite ± garnet. The pegmatite lens hosts several tourmaline-rich zones at a metre scale and is recognized by coarse-grained tourmaline and high abundances of interstitial albite quartz and muscovite.

Galan has sampled four representative rock chip samples from the surficial pegmatite at GS11. A partially completed soil assay programme has also been undertaken, with 65 soil samples to date at 50 m x 100 m grid spacing across the potential target zone centred over the pegmatite outcrop.

The soil sampling program is aimed at delineating potential pegmatites at depth through the detection of elevated levels of pathfinder elements at the surface (As, Sn, Cs, Ta, Rb).

Galan has submitted these rock and soil samples for assay and is awaiting results. Completion of the soil grid over GS11, and further follow-up soil and rock chip sampling work on other targets along the major structure that hosts the mineralisation are planned in Q3, 2002. The results will help guide the geophysical survey to test for blind pegmatites.

The Greenbushes South Lithium Project is a joint venture between Galan (80%) and Lithium Australia Limited (20%).