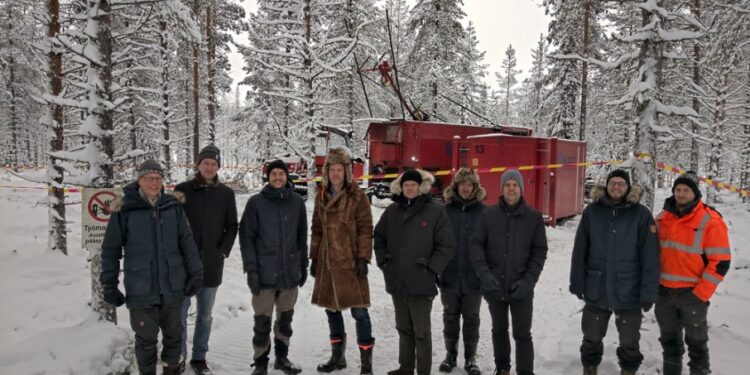 These results confirm a considerable down dip extension of previously drilled high-grade gold. Drill hole 21MJ010 intersected multiple significant gold intervals, the highlight of which was 7.69g/t gold over 16.45 metres, including 42.47 g/t gold over 0.9 metres.

Modeling of 21MJ010 appears to confirm the down-dip continuation and thickening of the bonanza-grade zone intercepted by drill hole 21MJ001, which yielded 1.35 metres at 93.88 g/t gold as reported by FireFox in June 2021.

President and CEO, Carl Löfberg, said that in addition, drilling encountered several new intervals of alteration and gold mineralisation at depth that may suggest growing potential with depth.

“This extension of high-grade gold to depth at Mustajärvi is a real breakthrough for FireFox,” Mr Löfberg, said. “Not only has our team been able to predict, test, and intercept new high-grade gold occurrences along strike for more than a kilometre, but we can also now visualise and model a strong mineral system growing in thickness with depth.

“A core rig will arrive back on site in early October, and we will proceed with a pattern of closely spaced step out holes to fully evaluate this high-grade zone. We shall also be testing new targets at depth and farther to the northeast.”

The Mustajärvi Project lies along the highway between the cities of Kittilä and Sodankylä, approximately 17 kilometers east of Kittilä. The property straddles the Mustajärvi Shear Zone (MSZ), a major right-lateral shear zone that has associated second and third-order structures which further dissect the project into separate structural zones.

The Sodankylä Group rocks, which are primarily to the north of the shear zone in the footwall, include metamorphosed sedimentary and volcaniclastic rocks. Geophysics and drilling have identified an extensive corridor of albite – sericite alteration in the footwall along more than two kilometres of the structure. The project remains at an early stage as FireFox and predecessor companies have drilled less than 7,000 metres to date.

FireFox has developed a structural model that has identified repetitive dilatant zones along the MSZ where vein swarms and higher-grade gold are concentrated. There are three main areas of gold mineralization along a 2.1-kilometre trend, namely the Central Zone, the Northeast Target, and the new East Target. he Central Zone and Northeast Target both host bonanza grade gold associated with clusters of veins in the footwall of the shear zone but are separated by more than 500 metres. These two areas have been tested by several programs since 2018 that have expanded the lateral extent of known mineralization in multiple directions.

The Northeast Target returned the best intercepts in both the 2019 and 2020 drill programs, and the Phase 4 programme has further improved the grades and intervals. Holes 21MJ001 and hole 21MJ010 both returned bonanza grades and approximately 150 gram-metres of gold.

The FireFox team believes that the increasing intensity of alteration with depth in the Northeast Target may be favourable for the depth potential of the system. Drill hole 21MJ010 is the deepest hole drilled in this area to date, and it stands out as having passed through 20 mineralised veins, each with at least anomalous gold content.

Drill hole 21MJ011 tested the Company’s structural model by drilling the area between the interpreted dilatant zones of the Central Zone and Northeast Target. Several moderately albitized and broken zones with limited tourmaline veining and narrow quartz veins were intersected, but no significant gold intervals were detected.

The only hole of the Phase 4 programme to target the Central Zone was 21MJ009. This hole was drilled more steeply than prior holes in an area of previously reported high-grade gold.

Several strongly albitised intervals contained evidence of multiple phases of deformation, likely confirming the presence of the down dip extension of the shear zone. However, there were relatively small amounts of pyrite and tourmaline, and correspondingly low grades of gold intercepted, with only one notable interval of 2.21g/t over 0.7 metres recorded at 66.3 metres downhole.

Finally, drill hole 21MJ008 was drilled near the far southwest extent of the Mustajärvi permit. The hole was located proximal to a gold-in-till anomaly and drilled to test for the presence of the MSZ passing through the gabbro. Although locally strongly albitised gabbro was intersected, no significant gold grades were returned.