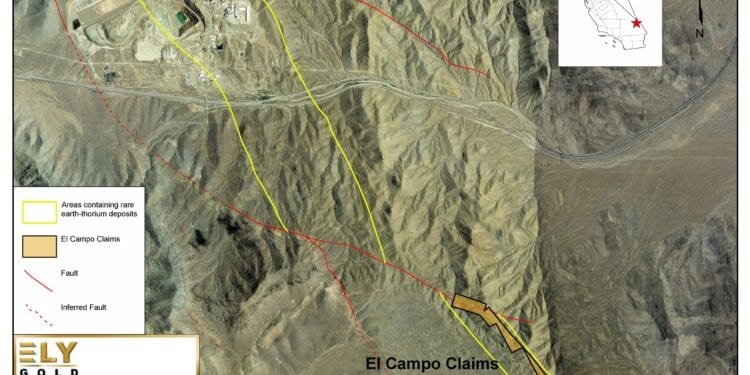 El Campo encompasses five contiguous unpatented mining claims that are surrounded by mining claims held by MP Materialswhich make up the Mountain Pass Mine Property. Mountain Pass is the only operating rare earth mine in the Western Hemisphere. El Campo is located along strike and 3.2 miles southeast of Mountain Pass.

President and CEO, Trey Wasser, said that since acquiring El Campo via staking, Ely Gold has collected and analysed a total of nine bedrock samples which returned up to 8.60% total Rare Earth Oxides (REO), similar in grade to Mountain Pass ore.

The REO mineralisation is hosted by syenite and shokonite dikes. The mineralised zones sampled are carbonatite composed of calcite and or dolomite, barite and bastnasite and are up to 20 feet wide at surface.

El Campo’s REO content is made up of heavy rare earth elements Nd, Pr, La, Ce & Sm. The elevated higher-value elements, Neodymium-Praseodymium (NdPr) are important for producing permanent magnets used in electric vehicles and wind turbines while the Samarium (Sm) is important for defence applications such as drones and cruise missles. All nine of the samples returned REO values of 4% or greater.

“We are excited with the impressive grades from our initial sampling that suggest the potential to outline a high-grade rare earth deposit at our El Campo Project,” Mr Wasser said.

“The proximity to the high-grade Mountain Pass Mine, North America’s only operating rare earth mine, makes this a very exciting project.

“El Campo will be placed in our ‘properties available for sale portfolio. The sale of El Campo will generate Ely Gold’s first rare earth royalty.”