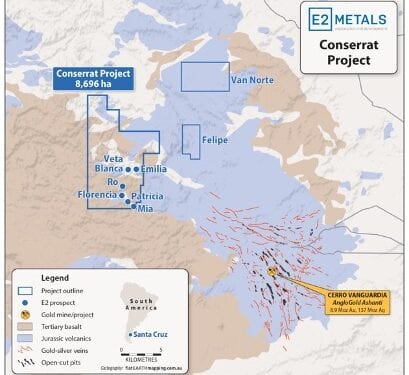 E2 Metals (ASX:E2M) has resumed drilling at the Conserrat project following the Christmas and New Year break. Conserrat is located in the Santa Cruz Province of Argentina and is host to a new greenfields gold and silver discovery centred 25km along trend from AngloGold Ashanti’s Cerro Vanguardia mine (historical and current reserves 8.9Moz Au, 137Moz Ag).

The work programme will initially comprise follow up drilling at the Mia prospect to test a new gold and silver zone discovered at depth beneath known high-grade mineralisation.

“We are pleased to be back in the field following the Christmas break and look forward to further drilling at the new mineralised gold and silver zone discovered in hole DDH-MI20-065 late last year,” Mr Williams said.

“The company is well funded for 2021 and is focused on making new discoveries at Mia and elsewhere within the project.”

Preliminary interpretation is that the high-grade silver mineralisation intersected in DDH-MI20- 065 relates to a second mineralised shoot that has developed at the intersection of the Lara Veinwith a separate strike-parallel structure. This shoot is interpreted to be distinct from shallow high-grade mineralisation discovered in October last year which is shown to be plunging shallowly to the west.

Initially, three diamond drill holes for 775m are planned to test the new gold and silver zone on a 75m by 50m grid, with the view to provide a preliminary interpretation on the extent and plunge of mineralisation to inform future infill drilling.

Systematic regional exploration has resumed at Conserrat with additional geophysical surveys and surface sampling is planned for Q1 2021.

A large number of gold and silver assay results remain outstanding for the Florencia and Emilia Esteprospects with laboratory turnaround times extended due to the Christmas and New Year’s break. All results are anticipated in mid-January.