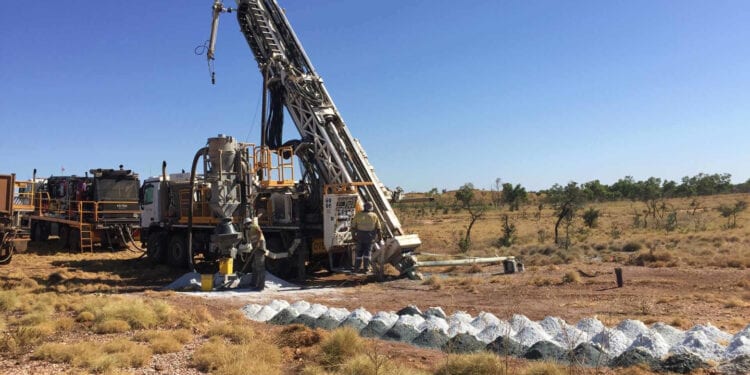 The Aquila and Crow zones are located adjacent and to the north of the large Brolga intrusion at Hemi. Extensional step out drilling in these two zones continues at a nominal 80m x 80m spacing to the northwest. Infill resource definition drilling to a 40m x 80m spacing is continuing in the central and eastern portions of Crow.

Step out and infill drilling at Hemi is on-going and the latest results at Aquila and Crow continue to firm up areas of high grade gold mineralisation (+2g/t) within a much larger and broader gold system.

The infill resource definition drilling programme will continue over the coming months at all four zones identified to date at Hemi. This will enable a robust resource estimate targeting a high level of JORC 2012 Indicated category.

Managing Director, Glenn Jardine, said the initial Hemi resource estimate is planned for completion by the middle of 2021.

“Wide spaced 80 by 80m extensional RC drilling continues in the northwest of Crow, with assay results awaited. Aircore drilling further to the west of the Crow intrusive has identified areas for follow up RC drilling.

“Drilling will continue at Crow to infill and expand the mineralised footprint.  Drilling at the western end of Aquila continues and has extended mineralisation at depth and to the west toward Falcon. A broad mineralised zone is present at least 400 metres below surface that includes narrower high-grade intervals.

“Total metres drilled at Hemi now exceed 200,000 metres since the discovery in December 2019. Seven rigs are currently operating around Hemi in support of completion of a maiden resource by the middle of 2021.”

At Crow, some outstanding high-grade intercepts continue to be returned north-east of the previously reported 64m @ 13.4g/t Aufrom 141m in HERC238 (section 30400E). New results include:

Additional Crow lodes in the footwall (north) of Aquila are also being defined with further drilling, demonstrated by an intersection of 24.6m @ 1.4g/t Au from 345m in HERC246D. Wide spaced 80 x 80m extensional drilling continues in the northwest of Crow, with further assay results awaited.

Recent aircore drilling has defined further western extensions of the Crow intrusive and follow up RC drilling for this area is being planned.

At Aquila, drilling is continuing to drill extend the Aquila high grade plunging shoot to the west. The Aquila zone now extends beyond 800m east-west and has been confirmed to depths of ~400m.  New intersections from the western end of Aquila include: