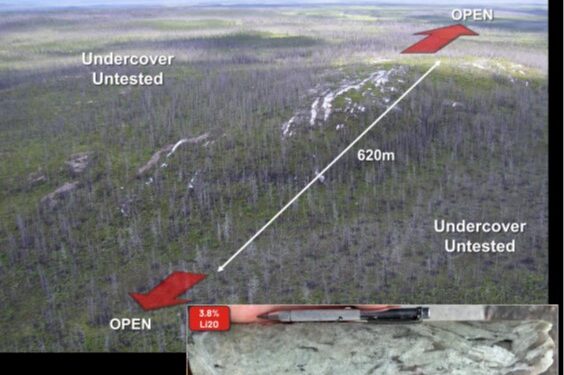 Cygnus Gold (ASX: CY5) has entered into a binding agreement which gives it an exclusive option to acquire up to 70% of the Pontax Lithium Project in Quebec, Canada.

Pontax is an outstanding opportunity for Cygnus to create value for its shareholders because high-grade lithium spodumene has already been established through drilling and there is immense scope to continue growing the mineralisation through exploration.

Mineralisation at Pontax remains open along strike and at depth with multiple walk-up drill targets. Through an earn-in agreement with Stria Lithium Inc., the company is planning a systematic exploration program on the property with diamond drilling to start in Q4.

The company plans to complete resource definition and step out drilling over the next six months. This agreement represents a unique opportunity for Cygnus to unlock potential in a world-class lithium province, underpinning its transition to a diversified global battery metals explorer.

“This is an exceptional opportunity for Cygnus. Drilling has already established that Pontax is a high-grade lithium spodumene prospect with mineralisation outlined over a 620m strike length,” Executive Director, Michael Naylor, said.

“The growth potential is also immense, with the mineralisation open along strike in both directions and numerous walk-up drilling targets. And the metallurgical testwork has generated 6% spodumene concentrate, meaning it meets the key criteria set by global customers.

“The successful share placement ensures we have the funds to underpin an extensive drilling program to begin unlocking the full value of Pontax.

“The Cygnus team looks forward to working closely with our Canadian partners at Stria Lithium Corp to create value for all the Pontax stakeholders.”

Located in one of Canada’s most prolific lithium provinces The Pontax Lithium Project has been acquired due to the potential to host a substantial lithium Resource. The Project covers 36 sq. km located in the prolific Superior Province of Quebec, with the James Bay region one of the most endowed lithium terranes in the world, even though only minimal modern exploration has been seen over the past 20 years.