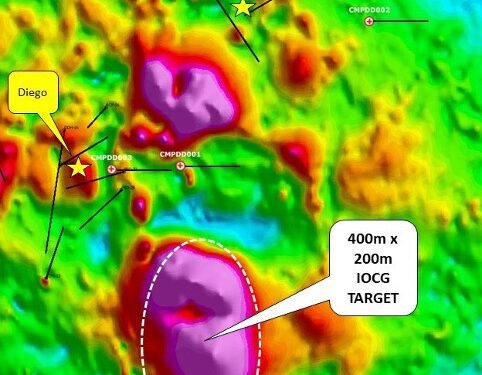 The targets include one which has a large footprint of 400m x 200m.

The company also reports that diamond drilling at the Peta Prospect has extended the strike length of near surface copper mineralisation to >one km, suggesting a linkage to the adjacent Pedro Prospect and illustrating the scale and continuity of mineralisation at the Project.

“We are extremely pleased with the high-quality targets that have been generated from our recent geophysical surveys at Las Petacas. Encouragingly, the new targets are supported by stronger geophysical responses than the mineralised zones drilled at Las Petacas to date and we are prioritising the first holes to test these IOCG targets.”

This Phase 2 geophysical work included an extension of GAIP survey data coverage over the south-eastern portion of the Project, as well as five lines of PDIP and a trial high-resolution GMAG survey over the Diego-Juan Prospect area.

The new GMAG data acquired at the Diego-Juan Prospects has provided support for further drill testing, with the definition of a large anomaly with a footprint of 400m x 200m and several smaller anomalies in close proximity.

The sources for the large and smaller magnetic anomalies have been modelled in three dimensions and suggests a compelling IOCG style target body of significant size and at a relatively shallow depth.

A total of 1,500m of core drilling has been planned at the Diego Prospect to test these targets. Other linear magnetic anomaly trends to the north coincide with IP anomalism that indicates the presence of sulphide minerals as well as magnetite.

The company considers this zone to form a contact zone that is prospective for copper and gold mineralisation.

Several new anomalies were identified from the recent GAIP survey likely related to sulphide mineralised sources within 200m from surface.

Of particular interest are multiple strong chargeability high anomalies in the new PDIP survey area to the east of the Diego Prospect (named the Diego East and Far East Prospects). The strongest anomalies indicate the presence of high sulphide content minerals which are considered prime targets in a copper-sulphide mineralised system.

Encouragingly, the targets are associated with a large circular geophysical feature, which may represent a buried intrusive body and surrounding skarn contacts, adding geological support to the defined targets and presenting drill-ready zones for testing.

Future drilling programmes are currently being planned and budgeted to test these skarn and IOCG targets.