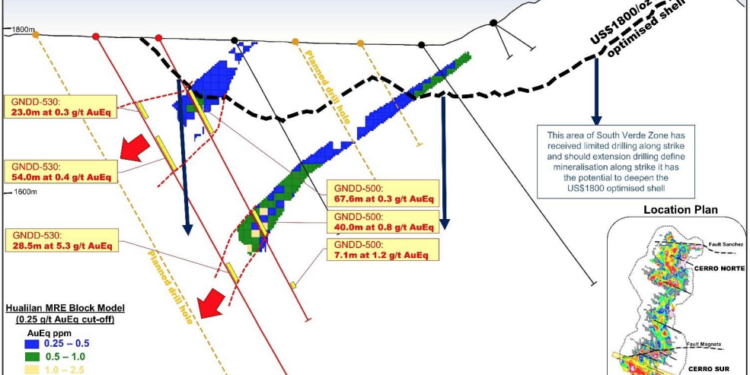 The results include the first drill holes that were not included in the company’s recent maiden 2.1 million ounce AuEq Mineral Resource Estimate (MRE) which includes a high-grade core of 1.1 Moz at 5.6 g/t AuEq. The MRE was based on 125,700 m of the company’s 204,000 m diamond core drill programme.

The current holes that were not included in the MRE comprise an additional 13,800 metres of drilling. The company has now completed 197,000 of the 204,000 m with results for the next 64,500 metres in the 204,000 m programme expected progressively over the next four months.

Managing Director, Kris Knauer, said the results continue to exceed the company’s expectations and confirms that mineralisation remains open in all directions, the majority of the new mineralisation is high-grade, and there is clear potential for the MRE to grow significantly via extension and infill drilling.

Several recently completed holes (assays pending) have opened new high-grade targets for extension drilling and the Company believes that Hualilan will remain open in all directions at the completion of the current 204,000 m.

In addition to the strong results from drilling designed to extend the mineralisation outside the interim MRE boundary several infill holes, often between holes with minimal grade, have returned significant high-grade results which is enormously encouraging.

“We indicated when we released our Maiden Resource Estimate at Hualilan it was very much an interim and we expect it to increase significantly,” Mr Knauer said.
“It was based on 126,000 metres of our 204,000 m drill programme and 2.2 of the 3.5 km of strike, over which the high-grade mineralisation has been intersected.

“These first results following the Mineral Resource Estimate confirm this. All the more exciting, is that if assays confirm what we have logged in several recent holes, we have some significant new zones to follow up in addition to the areas we are currently targeting. It now firmly appears that mineralisation at Hualilan will remain open at the end of the current 204,000 m programme.”