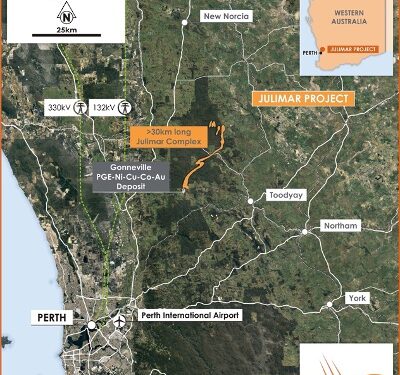 Chalice Mining Limited (ASX: CHN) has extended the high-grade sulphide zones at the northern end of the Gonneville deposit, located on Chalice-owned farmland at the exciting Julimar Ni-Cu-PGE Project in Western Australia.

Chalice’s strategy at Julimar is to advance development studies and regulatory approvals for a potential mine at Gonneville (on Chalice-owned farmland), in parallel with ongoing exploration activities across the full >30km extent of the Julimar Complex.

Exploration is continuing rapidly on broad spaced drill sites along the Julimar Complex, targeting the discovery of new high-grade Ni-Cu-PGE sulphide deposits which could add considerable value to a mine at Gonneville.

It is also possible that different styles of mineralisation could be intersected along the complex, potentially contributing to significant long-term value-creation that a world-class mineral district can create.

Drilling to date supports the interpretation of the Gonneville Intrusion (and the broader Julimar Complex) as having a rare chonolith-like geometry, which is similar to other major ultramafic-mafic orthomagmatic systems worldwide that host some of the world’s largest nickel-copper+/-PGE deposits, including Norilsk-Talnakh and Jinchuan.

Several outstanding broad zones of sulphide mineralisation have been intersected up to ~650m beyond the current Resource, materially extending the high-grade sulphide zones at the northern end of the Gonneville deposit.

Drilling to date has confirmed several north-westerly plunging shoots to the G2, G4 and G11 high- grade sulphide zones, which strike to the north-north-east and dip to the west-north-west.

The broad intersections include very encouraging higher-grade sub-intervals, which highlight the significant near-term growth potential in the high-grade portion of the current Resource. As such, step-out drilling in this northern portion of the deposit-west direction is being prioritised.

These latest results suggest that previous RC drilling in this area was too shallow and where the up- plunge extensions of the above results were intersected, the zones were heavily intruded by dolerite dykes. Notwithstanding this, the northern end of the Resource pit shell could deepen once the new results above have been modelled.

The following activities are continuing at the Julimar Project:

« Detailed infill RC Resource definition drilling over a small area of the Gonneville Resource to improve the understanding of the short-range variability and continuity of higher-grade zones.

« Reconnaissance diamond drilling across the Hartog, Hooley and Dampier prospects (target areas across ~10km of Julimar Complex strike length) with two rigs, under the approved CMP.

« Reconnaissance diamond drilling at the Baudin Target, ~11km north of Gonneville, drilling from proximal areas of farmland as part of the DMIRS Exploration Incentive Scheme (EIS).

« Mine development studies to support a Scoping Study for a mine at Gonneville on farmland, targeted for completion in late 2022.

« Baseline surveys of ground water, surface water, flora, fauna and dieback are underway, as part of a long-term baseline and monitoring program to support engineering studies and environmental assessments.