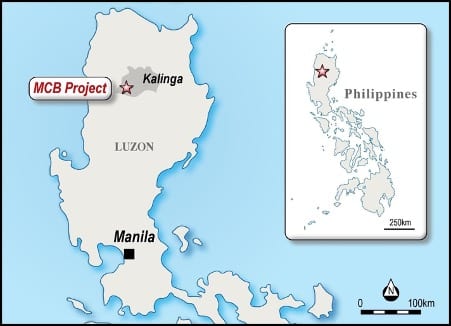 Celsius Resources Limited (ASX:CLA) has declared a maiden JORC compliant Mineral Resource for the Maalinao-Caigutan-Biyog (MCB) Copper-Gold Project in the Philippines. The MCB Project is the flagship in a portfolio of assets being acquired by Celsius from UK Company, Anleck Limited.

Anleck Chairman and CLA Director designate, Martin Buckingham, said the release of the maiden JORC Mineral Resource statement signifies the credibility of the MCB Resource with the potential to be a future copper and gold producer within the Asia Pacific region.

“Implementation of development plans are now underway, with drilling to commence this Quarter in support of a scoping study. We look forward to the upcoming Annual General Meeting and transaction completion, and thereafter joining the CLA Board so that a focused effort can be made on developing the MCB Project,” Mr Buckingham said.

The MCB Mineral Resource has been defined as a body of copper and gold mineralisation which is predominantly above 0.2% copper on average. The boundaries of this mineralisation are parallel to the dominant geological trends and the genetically related intrusive tonalite bodies that have been interpreted at MCB.

The 0.2% lower limit is also broadly in line with the expected economic limits of the likely mining and processing options considered for the MCB deposit. Therefore, a preferred lower cut-off grade of 0.2% copper was applied to the reporting of the Mineral Resource estimate.

As part of the future work programme a mine plan will be developed that focuses on the early development of the central copper-gold higher-grade core to maximise returns in the early years of production. These studies will consider copper and gold mineralisation at higher cut-off grades ranging up to 0.5% copper

The MCB Mineral Resource estimate has already defined a large deposit, with its total tonnage increasing to over 300Mt at lower cut-off grades. In addition, there appears to be significant scope for further discoveries and extensions to the currently defined Mineral Resource at MCB.

The exploration programme for the 3rd renewal of EP-003-2006-CAR aims to advance the project to a Scoping Study phase while gathering information to support a Definitive Feasibility Study. Information gathered will support further ore body modeling and development of an underground mine plan, metallurgical testing, sterilization drilling, flotation test work, development of a conceptual hydrological model, infrastructure layouts, high-level financial model along with an updated Mineral Resource.

Depending on the outcome of the scoping study, preparation/planning will occur for the delivery of a Definitive Feasibility Study (DFS) and therefore the Declaration of Mining Project Feasibility (DMPF) pursuant to Philippine DENR Administrative Order No. 2010- 21.

The MCB Project is located in Barangay Balatoc, Municipality of Pasil, Province of Kalinga on the island of Luzon.

Lefroy Kicks Off Drilling At Burns