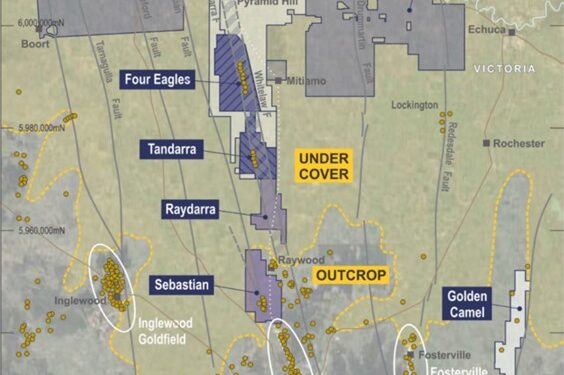 The Lawry prospect lies on the Reynolds trend, a lightly explored structure located about 250m east of the main Tomorrow trend, which is the most advanced prospect at Tandarra.

The recent diamond drilling results at the Lawry prospect have shown that the Reynolds trend is also well mineralised and justifies an infill drilling programme next field season.

“The extremely high grade gold intersection at shallow depth on the Lawry prospect means that there are now three parallel zones of gold mineralisation with high grades at the Tandarra Gold Project. This gold distribution is similar to that mined at the historic Bendigo Goldfield which produced 22 million ounces of gold,” Technical Director, Bruce Kay, said.

The Tandarra Gold Project is a joint venture between Catalyst (51%) and Navarre (49%) situated along the Whitelaw Gold Corridor, which is considered to be a major structural control of gold mineralisation north of Bendigo.

In Victoria, Catalyst manages the entire Whitelaw Gold Belt and has interests in thirteen Exploration Licences and two Retention Licences which extend for 75 kilometres along the Whitelaw and Tandarra Faults north of Bendigo and in other areas north of the Fosterville and Inglewood gold fields.

Diamond drillhole TND007 has been completed at the Lawry gold prospect at Tandarra with the objective of confirming broad zones of gold mineralisation identified by air core drilling completed in 2020 and 2021.

The breccia zone is oxidised and broken, with several sections of core loss in fault pug zones that could well contain further mineralisation.

The Lawry prospect lies in grazing paddocks which will be too wet for any infill drilling this winter. BLEG re-assays of the pulps have been ordered for significant intercepts in TND007 – the large sample volume may even out the nugget effect of coarse gold– results awaited.