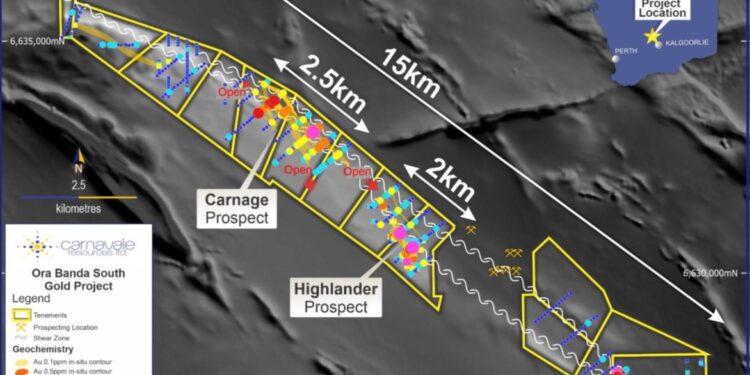 “We are excited to have confirmed the scale of the new prospects at Ora Banda South, a substantial aircore programme was executed to expand the high-grade gold zones that were identified in the initial scout drilling,” CEO Humphrey Hale said.

This wide-spaced programme has provided additional definition to the gold anomalies in the regolith and improved confidence along strike. An RC drilling program, at Carnage and Highlander is planned to define scope of the shallow bedrock gold mineralisation in the top 200m from surface.”

The phase two aircore drilling programme, comprising 176 holes for 12,894m, followed up on the strong gold mineralisation identified by the wide spaced phase one aircore programme in December 2021.

This second recent aircore programme has drilled wide spaced lines, 360m apart, across the new gold prospects with holes drilled on 40m to 80m drill centres. The aircore drilling is targeting the geochemical footprint of concealed gold mineralisation. Drill spacing along the initial lines was reduced to 40m by infill drilling where gold anomalies had been identified, samples were taken as 4m composites from the spoil piles.

Results of the drilling, outline significant gold mineralisation in the regolith geochemistry and gained improved understanding of the geology and structure, the depth of transported material as well as the depth of weathering within the regolith profile across the tenement package. This recent drilling program has successfully confirmed the scale of the original anomalies and provided additional resolution to these new gold Prospects.

The geology of the Carnage prospect is dominated by a sequence of sedimentary rocks crosscut by the Carnage Shear. The area is overlain with a layer of transported material that is up to 40m in places.

The transported cover has prevented any surface sampling such as soils or auger sampling from being effective at detecting concealed gold anomalism in earlier exploration.

CAV reviewed the structural information from the aero magnetics and extrapolated the gold in soil anomalism which suggested a that there could be concealed gold targets beneath the transported cover.

CAV drilled 6 additional lines of aircore at the Carnage prospect 360m apart. In addition to the new lines of drilling, CAV infilled the initial discovery lines of aircore to define the extents of this new mineralisation. The Carnage Prospect has a confirmed gold anomaly that is up to 500 m wide and 2.5km long within the sediment package along the Carnage shear that is open to the northeast south and southwest.

The mineralisation at Carnage is interpreted to be orientated North- East along the Carnage Shear and is modified to have a more North-South trend by the geology. The strike extent of this prospect is over 2.5km and is open along both strike trends.

There is a close relationship with primary gold mineralisation and the sedimentary units that are more mafic in composition intersected by the drilling.

Further drilling is required to find the extents of the mineralisation and refine the RC drill targets.

The geology of the Highlander Prospect is similar to the Carnage Prospect with sediments intersected by the Carnage shear and other associated fault structures.

The depth of transported cover is not as extensive as at the Carnage Prospect, which is approximately 3km to the Northwest.

The Highlander Prospect has a blanket of anomalous gold and arsenic in the soil geochemistry that was the target for the initial broad spaced aircore drilling which intersected high-grade gold mineralisation. The second aircore programme has confirmed this anomaly in more detail and has outlined more than 2km of strike extent.

Gold mineralisation has been associated with the same Carnage Shear and similar North-South modifying influences as the Carnage prospect. The supergene gold anomaly extends over 400m in width and is made up of anomalous gold in the transported horizon directly associated with and overlying gold anomalism in the underlying residual saprolite. Highlander Prospect has a strike length of over 2km which remains open to the Southwest and Northeast.

CAV is analysing the multi-element geochemistry, primary structures, and geology with respect to the morphology of the gold anomalies. As a result of this review and as part of a systematic exploration approach, a more detailed, exploration drilling program is being planned to extend and expand the exciting targets at the Carnage and Highlander Prospects.

CAV will drill test the deeper extensions of the regolith anomalies with RC drilling to 200m in Q3 subject to rig availability.