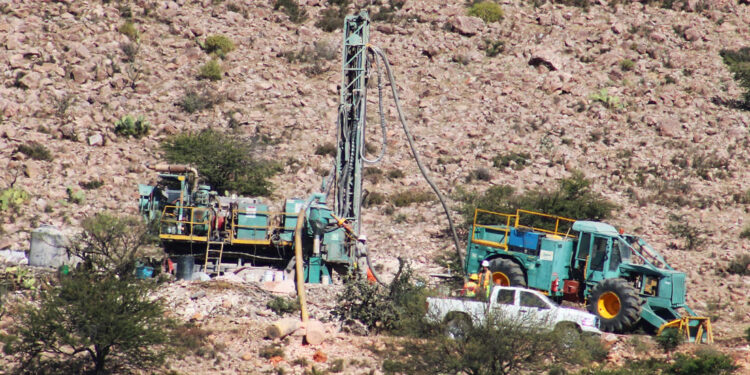 All three holes intersected additional mineralised structures that had not been previously identified.

The Phase I drill programme at Jesus Maria started in late 2021 and resumed in mid-January after the holiday break. To-date 14 reverse circulation holes have been completed, consisting of a combination of step-out and infill holes designed to extend known mineralisation down-dip, locate new zones of mineralisation at depth, and define the boundaries of high-grade ore shoots that exist along structural intersections.

Hole 21-JMRC-01 was designed to test an approximate 120m wide gap, between high-grade mineralisation reported in historic surface trenching (values between 200 to 800 g/t Ag) and high-grade mineralisation returned from historic diamond drilling down-plunge. This high-grade shoot has an apparent, shallow, southwest plunge, based on limited drilling, and is interpreted to represent the intersection of the Jesus Maria and Gully Fault structures.

Drillhole 21-JMRC-04 was an infill-hole designed to test the on-strike continuity of high-grade Ag mineralisation reported in the drillhole JM_DDH-14_14 approximately 55m to the east. The hole intersected multiple intervals with Jesus Maria style polymetallic mineralization with an overall increase in the grade of base metal mineralisation compared to holes drilled to the east. The best interval returned 122.8 g/t AgEq over 7.6m including 368.1 g/t AgEq over 1.52m.

“The first three holes reported from the Jesús María silver deposit, together with the recently-reported hole 21-CARC-29 under the Capitan Hill Oxide Gold deposit, demonstrate the significant growth potential for silver mineralisation at the Peñoles project,” CEO, Alberto Orozco, said.

“I am particularly excited for the results of hole 21-JMRC-01, which confirm the continuity of high-grade silver mineralisation from surface trenching. This high-grade zone has only been drill tested to shallow-depths and remains open to expansion down-plunge.”