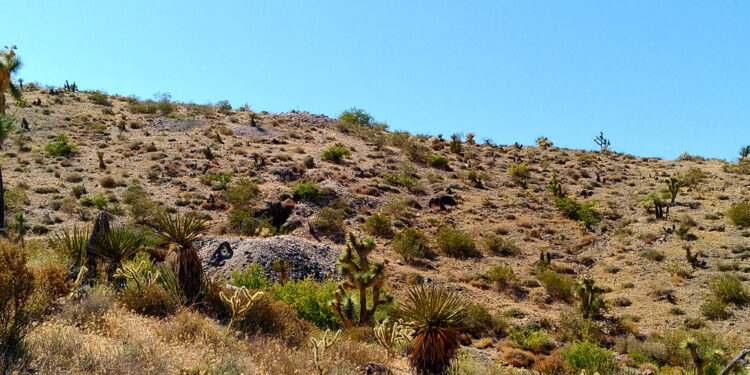 Assay results for drill holes GR21-69 to 78, all from the Eldorado zone, have been received.

These holes were all step outs, mostly on the north and west side of Eldorado, and are starting to define a higher-grade central zone surrounded by lower grade material with the total zone now identified over an area 300 m by 200 m that remains open.

Results from the Eldorado zone have exceeded expectations with 9 of the 10 step out holes intersecting gold mineralisation and the majority of holes showing indications of multiple stacked mineralised horizons.

Holes GR21-73 tested the northwest side of the Eldorado zone and returned 0.6 g/t gold over 30.48 m from 12.2 m depth, including 1.8 g/t gold over 6.1 m. Hole GR21-73 intersected a second zone of mineralisation at depth that returned 0.7 g/t Au over 3.05 m from 57.9 m depth.  Overall the zone appears to be getting thicker and perhaps stronger to the northwest where it remains open for expansion.

Hole GR21-69 was a 220 m step out on the north side of the Eldorado zone.  The hole intersected three mineralised horizons, supporting the company’s interpretation that the Eldorado zone has potential for multiple stacked sub horizontal mineralised zones and demonstrating significant room to expand the zone.

Hole GR21-71 was located 130 m south of hole GR21-69 and 100 m north of the Eldorado zone.  This hole also intersected three mineralised horizons, with the upper horizon also including a few metres of historic leach pad material.  Holes GR21-69 and 71 support potential for significant expansion of the Eldorado mineralised zone to the northeast.

“We are very pleased to resume drilling at Gold Range and continue to test and understand this significant mineralised system which we have successfully expanded with each exploration programme,” President of the company, Dr. Shane Ebert, said.

“Drilling will start at the Excelsior zone which is proving to be a higher-grade part of the system and will then expand outwards to test the large-scale potential of the project.  The results from the Eldorado zone confirm multiple mineralised horizons over a sizable area and we look forward to additional results from the Malco and Excelsior zones which occur along strike, to better understand the potential to expand and possibly join the three zones into one larger deposit.”

A reverse circulation drill rig has been mobilised to Gold Range and will continue to expand known zones and test new targets within the existing permit areas.  A new exploration permit amendment is in progress and once received will allow systematic drill testing of the larger scale exploration potential recently defined over a strike length exceeding 3.2 km and over widths up to 500 m.