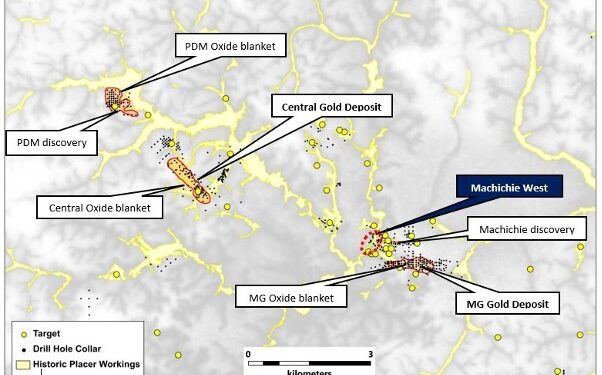 Highlights are as follows:

“Firstly, they indicate that the east-trending Machichie Main zone can be traced for at least 350m west of previous drilling, significantly increasing the strike extent, and in particular extending the high-grade zone previously identified in recent trenching. The Machichie Main zone remains open to the west.

“Secondly, and perhaps more importantly, these results suggest the presence of a large new mineralised body in intrusive rocks comprising a swarm or array of numerous gold-bearing quartz veins and veinlets. Trenching suggests that this new zone is northeast-trending parallel to the general trend of the veins. The array extends over an area of at least 500 x 300m, and includes the previously identified Machichie SW veins. This mineralised area remains open in every direction.

“Finally, the trenching programme suggests a significant amount of oxide material has likely resulted from the weathering of this new mineralised zone which should add to the overall inventory of gold-in-oxide mineralisation, which already includes three gold-in-oxide blankets discovered thus far at Cuiú Cuiú”.

The Machichie target is located 500m north-west of the MG gold deposit.

Previous drilling at the Machichie Main zone identified a persistent mineralised zone which is east-trending and dips steeply to the north. This main zone consists of a high-grade core zone surrounded by a low-grade alteration envelope which is similar in style to the primary bedrock gold deposits at MG and Central, as well as the recently announced PDM basement discovery.