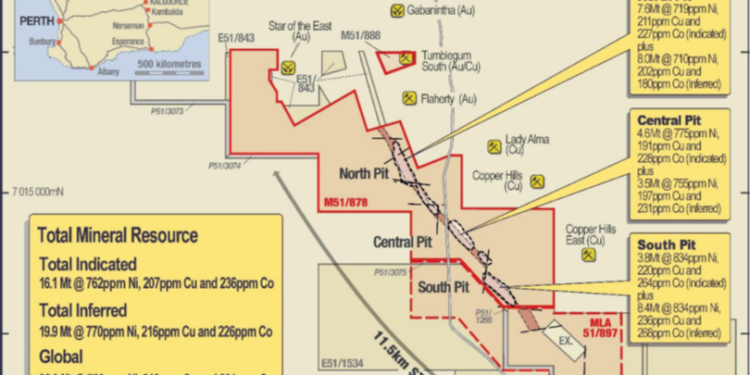 Bryah Resources Limited (ASX:BYH) has released a significant upgrade in the previously reported base metal mineral resource within the Australian Vanadium Project deposit which is located within the company’s Gabanintha Project in central Western Australia.

Both companies are working together to maximise the recovery of metals from this world class Vanadium-Titanium-Magnetite (VTM) deposit, with Bryah taking the lead on further studies relating to the base metal recovery circuit.

Nickel, Copper and Cobalt are all critically important, high value energy metals vital for the global transition to electric vehicles.

The collaboration between Bryah and AVL has been assisted by the MMI grant to AVL of A$49M to progress critical minerals. BYH is named as a collaborator under the MMI application.

The VTM deposit is approximately 11.5km long within the Project area with most of this lying on Mining Lease M51/878, which was granted in 2020.

AVL has now completed a Bankable Feasibility Study3 on the vanadium resource at the Project.

“With AVL progressing strongly toward vanadium production; completing the BFS and being granted a $49 Million grant from the Government, Bryah also comes a step closer to realising value in its mineral rights,” CEO Ashley Jones said.

“We are very pleased to report a substantial increase of 15% in the base metals Mineral Resource within the high-grade vanadium-titanium-magnetite deposit at Gabanintha.

“Metallurgical test work from 2018 and 2022 indicate that a significant non-magnetic nickel-copper-cobalt rich sulphide tailings stream would come from the plant following magnetic separation of the vanadium-bearing magnetite concentrate.

“We know that the vanadium ore beneficiation process effectively concentrates the sulphide minerals in the tail, enabling further concentration by flotation methods.”