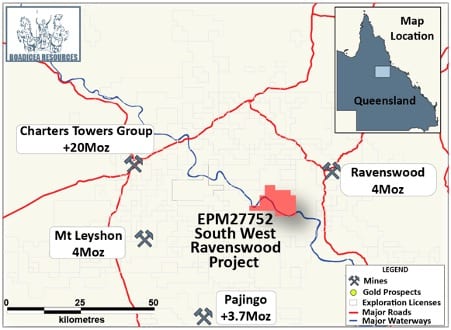 Boadicea Resources (ASX:BOA) has submitted an application for exploration licence for permit EMP27752 in the Charters Towers Province of north Queensland.

Surface geochemistry and prospecting conducted by BHP in 1994 and 1995 has defined a single anomaly over a previously untested target, known as Dreghorn. The Dreghorn prospect has been identified from stream samples and BLEG (Bulk Leach Extractable Gold) analysis and has an anomalous strike length of more than 4km.

The region is highlighted by a number of multi-million-ounce deposits that have multiple geological settings, including:

Managing Director, Jon Reynolds, said Boadicea’s strategy and proposed work programme for the South West Ravenswood licence area, covers the same geological units of the Ravenswood Granodiorite complex that are contiguous with and hosts the Ravenswood gold deposits, and proposed exploration is supported by the anomalous stream sediment samples mentioned.

“As previously highlighted, the company has been focussed on development of new gold exploration targets within Australia,” Mr Reynolds said.

“This started with the acquisition of the Koongulla project in the Paterson Province of WA.

“The South West Ravenswood project has been highlighted as an underexplored project with some impressive operating mines as neighbours, including Ravenswood, Mt Leyshon and Pajingo. The previous work completed by BHP has provided Boadicea an exciting base to focus further exploration.”