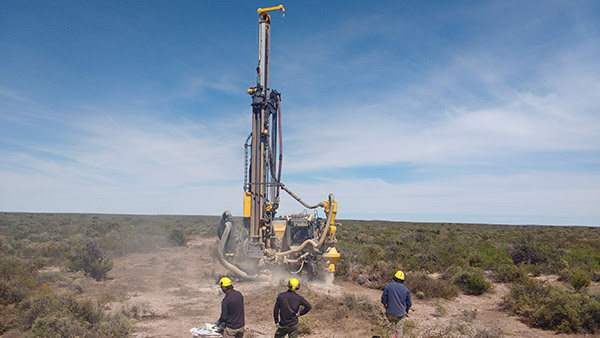 The current 3,500-metre reverse circulation (RC) drill programme is testing the potential expansion of the Ivana deposit to the west as well as adding holes in areas of lower drill hole density at the margins of, and within, the Ivana deposit to aid in upgrades to the mineral resource estimate that will support advanced engineering studies.

Highlights of the new results include:

“We are very pleased to see these positive results coming from our step-out drilling peripheral to the Ivana deposit,” President and CEO, Nikolaos Cacos, said.

“We are also interested by the high vanadium numbers encountered, most of which exceed the average grade in our current resource estimate.  This programme is an important step in advancing our flagship deposit.”

This first small group of results are from holes drilled from approximately 500m to 1.5km west of the Ivana deposit, distributed over about one square kilometre covering an area that had been previously explored by pit sampling and interpreted as the western extension of the Ivana deposit. The average hole depth is five metres, with a maximum of 11 metres.

Of the 26 holes reported, eight returned anomalous uranium (U3O8 >35ppm) including four holes with U3O8 intervals >100ppm (see Table 1).  Notably, 23 holes returned at least one interval of more than 150ppm V2O5. The uranium and vanadium mineralisation are present in all cases from surface, or near surface, forming a 3.0 to 4.0 metre-thick mineralised horizon where carnotite is interpreted as the principal uranium-vanadium mineral.

Over 200 of the planned 260 holes have been drilled to date and the drilling programme is ongoing.  Turnaround time for analytical results from the laboratory have been significantly extended in the last two months, but now appear to be returning to reasonable levels and Blue Sky anticipates additional results in the coming weeks.