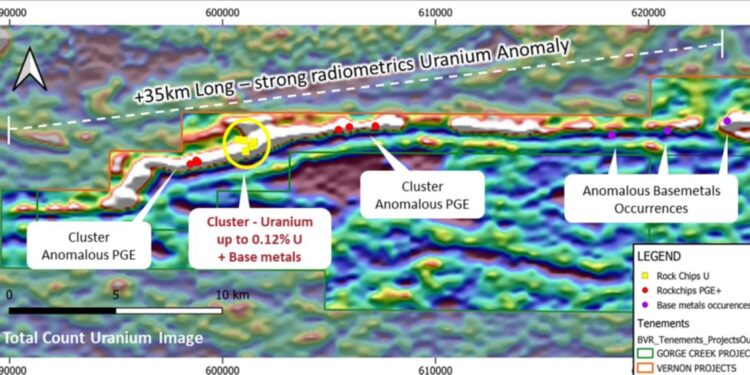 Newly-listed Bellavista Resources (ASX: BVR) has confirmed that processing of aerial radiometric surveys by its geophysical consultants has revealed a strong, large uranium anomaly at its Kiangi Project in Western Australia.

“This is a highly promising result, particularly given that it coincides with the high uranium values contained in historic rock chip samples taken from Kiangi,” Mr Wilson said.

“Our brief pre-IPO field reconnaissance visit earlier this year confirmed the presence of a strong uranium response when a scintillometer was used to locate the target unit on the ground.

“Our field teams will be in a position to carry out further investigations now that we are mobilising crews to site in preparation for drilling at the Brumby Project”.

A small number (16) of surface rock chip samples were collected by Geopeko in the early 1980’s. Several of these returned elevated uranium values up to 0.12% uranium, and four of the samples returning over 400ppm uranium, the global average of current producing uranium deposits.

The rock chip samples are from locations mapped as Glenn Ross Shale, a member of the Kiangi Creek Formation. This formation has known base metal occurrences (Cu-Zn) approximately 20km east from where the uranium anomalous rock chips samples were collected, and the unit also appears to contain elevated PGE from limited historic surface sampling.

The uranium is associated with elevated base metals (Cu, Zn, Ag) as well as elevated phosphorus and vanadium. This may represent a stratabound mineralisation style uranium target or red-bed style uranium target. The Kiangi Formation is mapped for at least 35km of strike within Bellavista’s tenements representing a very large target horizon.

Bellavista listed on the ASX on May 25, 2022, following a highly successful IPO which saw the Company raise $6.5 million. Bellevue Gold (BGL:ASX) founder and Managing Director Steve Parsons and Capricorn Metals (CMM:ASX) Executive Chairman Mark Clark are backing the Company with each having a significant 10% stake.

Ready to Supply the World

Ready to Supply the World