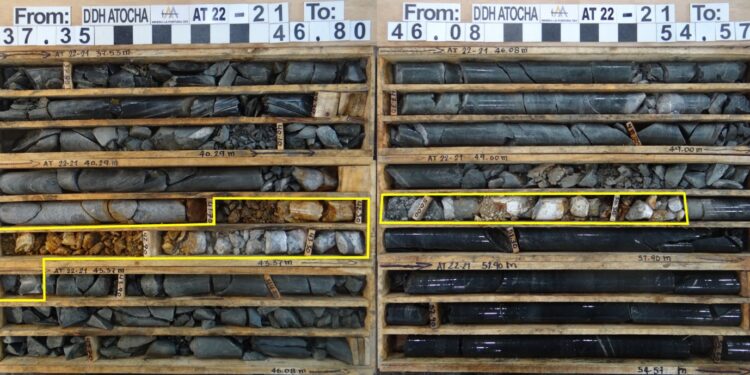 “We are pleased to see more parallel structures following wide vein corridors in our first two holes drilled in this new area, another discovery on the Atocha property,” President, Raul Sanabria, said.

“Assay results of up to almost three quarters of a kilo per tonne silver equivalent makes a good start to the phase 2 programme. The next drill holes will test the continuity of the structure along strike while we develop more drill targets to the south, where we found at least three more parallel vein zones within short distance.”

The first hole of this phase 2 programme (AT-22-20) intersected two stacked veins roughly ten meters apart from each other.

The veins are hosted in amphibolitic to graphitic schist. Graphitic schist is the preferred host rock, showing pyritic alteration haloes around the veined zones. Drill core in the mineralised zones appeared very fractured due to a coincident faulted zone in the same zone of the veins and may had affected results due to washing and weathering.

Baroyeca drilled its second hole as a step out toward the southwest following the same structure along strike and at shallow depth. This successfully intersected the same vein zones as intersected in hole AT-22-20 and was also affected by coincident faulting.

The first vein zone is 1.5m wide and shows sulphide oxidation in the upper half of the interval due to washing and weathering. The second 80cm wide vein shows a fault gouge in the upper faulted contact of the vein with the host rock.

Assays are still pending for this hole. A third drill hole has just started as a step out to the northeast of the two drilled to date in this new area.