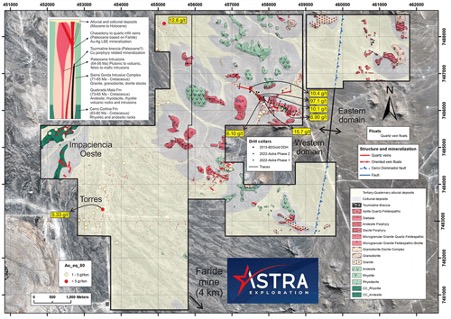 “The grades continue to demonstrate the potential for a large, mineralized gold and silver deposit. This low cost, but very effective exploration conducted by our team further demonstrates the exciting potential we believe exists at Pampa Paciencia. It is reasonable to expect that further work like that just completed will identify additional veins in this under explored district.

“The company will proceed with a trenching program to better define this gold mineralization ahead of a drill programme.”

The lithologies at Pampa Paciencia are known to host epithermal and porphyry mineralization yet remain mostly unexplored. The geological information received from the last two phases of drilling confirmed the need for detailed mapping to further reveal the potential for additional vein-style mineralization. The mapping results demonstrates this potential and was completed by Astra personnel at a 1:5,000m scale.

Pampa Paciencia is host to multiple gold and silver bearing Low Sulphidation Epithermal (LSE) vein subcrops and areas of float material. These subcrops and float materials are in partially covered areas, resulting in the concealed veins only being discovered in 2015.

Mapping has defined two lithological and mineralization domains that are separated by the major Cerro Dominador NNE-striking fault.

A total of 2,000m of new interpreted vein strike length was added at the Impaciencia Oeste target area, with anomalous precious metals values of up to 3.36ppm Au equivalent (0.75ppm Au and 209ppm Ag) in the north portion of this area.

At Torres, another newly identified target located 1.5km southeast of Impaciencia Oeste, LSE vein float was identified and accounts for up to 10% of the subcrop and float. The area was sampled with a 100 m by 100 m grid and samples returned up to 5.33ppm Au equivalent (3.93ppm Au and 112ppm Ag). NW and NE structures can be interpreted from the geochemical results at this grid sampling.

The Torres and Impaciencia Oeste areas are interpreted to be part of the same trend, which aligns with the Faride mine LSE veins to the SE. This trend, and in particular these two new targets, are ready for a trenching program to define thickness and grade of the veins and to define new drill targets in the Impaciencia claim area.