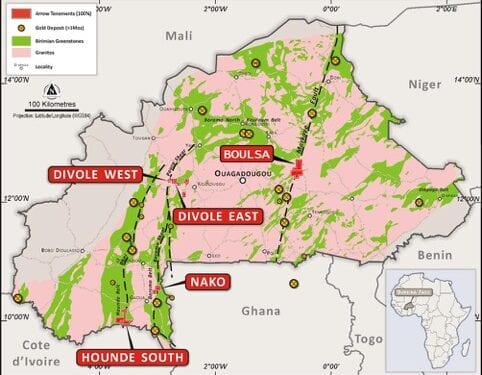 Arrow’s Chief Executive Officer, Howard Golden, said the receipt of complete results from the maiden drilling programme at Divole West has proven that recently announced results were part of the larger Dassa gold discovery, including at least two mineralised zones over a 3km strike length and remain open in multiple directions and at depth

“The Arrow teams in Australia and Burkina Faso have systematically planned and executed a successful early exploration programme. We will very shortly be following up these very positive results with further drilling as well as aggressively pursuing our other exploration projects.”

The drilling targeted an unexplored part of the Birimian Shield of Burkina Faso and has confirmed the Dassa gold discovery, comprising two potentially connected mineralised zones with gold grades up to 45g/t Au. The discovery remains open laterally and at depth.

The mineralised zones are hosted predominantly by siliciclastic sediments, with localised quartz veining. Mineralisation is at very shallow depth, mainly within the oxidised zone, and is underlain by granitic intrusive rocks that are also altered and contain sporadic elevated gold concentrations.

Over 60% of the drill holes intersected mineralisation of at least 1g/t Au,

The northern section of the Dassa discovery shows continuous gold mineralisation (+1g/t Au) over a strike length of over 500m. Higher grade gold occurs at the northern end coincident with thickening of the shallow-dipping sediment sequence.

The southern Dassa zone is similar to the north in that the primary higher-grade gold is mainly confined to sedimentary rocks, with some mineralisation also hosted in the underlying intrusion. Gold mineralisation (+1g/t Au) is continuous over a strike length of over 300m.

A further RC drilling programme is planned for Q1 2020 at Dassa to define extensions of the gold mineralisation laterally and at depth.