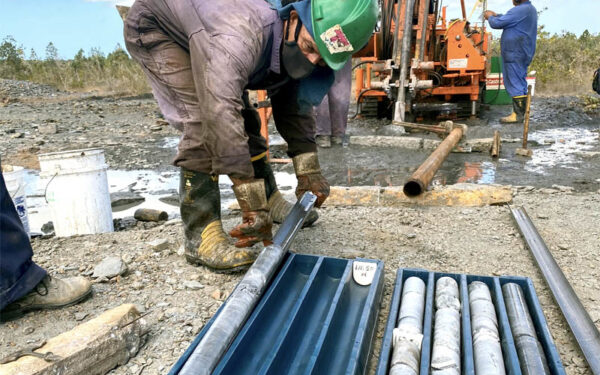 Antilles Gold Limited (ASX: AAU) has received approximately 70% of the assays from the outcropping gold domain of the El Pilar oxide deposit in central Cuba, from a recent 1800m drilling programme.

The outstanding gold assays, and the copper results previously reported indicate a robust gold and copper discovery is emerging at El Pilar for both the oxide and sulphide ores.

The assays should be considered as preliminary as they were undertaken at the Cuban Government’s LACEMI (Laboratorio Central de Minerales) laboratory in Havana which though capable and with modern equipment, is not certified. All assays will be replicated at SGS’s laboratory in Canada within the next four to six weeks.

Assays from the gold domain of the El Pilar oxide deposit, together with earlier results from the underlying copper domain, and those from 28,000m of historic drilling indicate it is highly likely the oxide deposit will support the development of a low cap-ex open pit mine to produce gold and copper concentrates.

The company believes that additionally, extensions to the surface oxide gold mineralization, or additional zones within the near vicinity are highly probable, and could increase the Exploration Target Range.

Subject to the 7,000m drilling programme on the oxide deposit to be undertaken between February and April 2023, replicating recent drilling results, a mine could be developed at El Pilar by the end of 2024, and financed primarily by advances from the sale of concentrates.

“If a mine is developed within this time frame, part of the surplus cash flow would be utilised from early 2025 to fund exploration of the El Pilar copper porphyry system, and other major properties held in the company’s Exploration Agreement with GeoMinera,” Executive Chairman, Brian Johnson, said.

“For exploration funding in 2023 and 2024, the company is in discussions on a financing arrangement that would result in minimal dilution, and could be repaid from expected proceeds from the settlement of contractual claims against the Dominican Republic Government from a previous project, which total approximately US$30 million.

“The claims are currently being arbitrated at a unit of the World Bank in Washington DC with the final hearing of the Arbitration Tribunal to take place between 5 and 9 June 2023. Decisions on the various claims are expected to be handed down by 30 September 2023 followed by payment of awards by the end of 2023.”