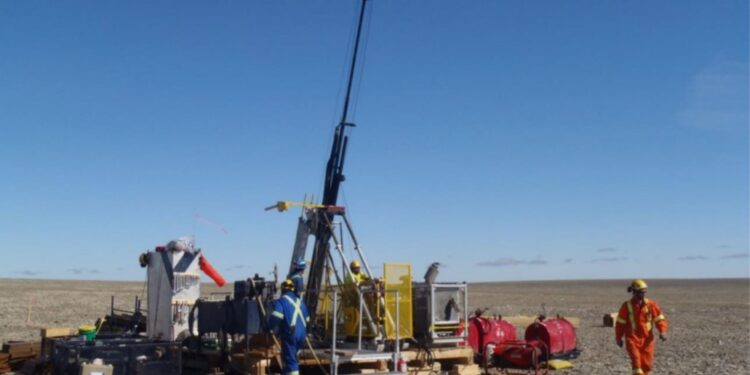 A major diamond drilling programme is scheduled to commence at Storm next month, to test key resource and exploration targets. This drilling programme will be the first since American West Metals became project operator, under the option agreement with Aston Bay Holdings.

The 2750N Zone copper mineralisation is open at depth and along strike.

Drilling will also test a number of high-priority electromagnetic (EM) conductors that were identified by the 2021 fixed loop electromagnetic (FLEM) survey completed by American West over the Storm Project area.

The survey identified multiple near surface anomalies, some of which are coincident with outcropping copper occurrences, that are consistent with the EM responses of known massive chalcocite mineralisation on the Storm property.

The 2021 survey also identified several large, flat lying EM conductors that may represent a deeper, stratigraphic source to the near surface mineralisation.

Managing Director, Dave O’Neill, said these anomalies present compelling targets for the discovery of a major sedimentary copper mineral system. APEX Geoscience Ltd have been contracted to manage and execute the 2022 programme.

“With a round of successful drilling at our West Desert Project already delivered this year, we are now excited to be preparing for our maiden drilling programme at the Storm high-grade copper project,” Mr O’Neill said.

“Drilling at Storm will commence in the coming weeks with logistics for the programme well underway. Having a number of high-value targets planned for drilling, we look forward to expanding on the thick, high-grade copper already discovered.

“The drill programme has a dual strategy. Firstly, to define resources that may support an initial low-footprint mining proposal utilising a DSO model that produced a 53% Cu product in our initial test work.

“Secondly, to confirm the outstanding growth potential of the Project by identifying further, undiscovered zones of high-grade copper mineralisation in unexplored areas.

“We are pleased to be working closely again alongside our partners Aston Bay Holdings and APEX Geoscience on this exciting project and look forward to reporting news as drilling progresses.”