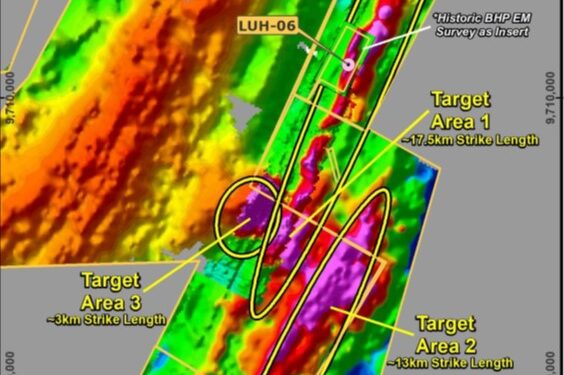 The gravity survey programme is now more than 60 percent complete with the Kabanga NE and Luhuma tenement areas now fully covered. The ground-based gravity surveys will also be completed on the Kabanga East and Kabanga West tenements soon.

“The regional gravity survey program has been extremely successful in identifying a series of new and previously undiscovered nickel exploration targets that pave a very clear exploration path and strategy, that we hope will deliver exceptional shareholder value,” Executive Director, David Riekie, said.

“Our geological team and geophysical consultants in Africa have really done an excellent job. These results have exceeded our expectations with respect to their scale, number and the intensity of the signatures.

“We hope to also add new target areas from the surveys in Kabanga East and West. The Luhuma corridor has become particularly promising and now extends over 30kms with 14 new high priority targets.

“As we have mentioned in earlier releases to the market, historical drilling has already established that the corridor is mineralised and has intercepted Nickel sulphide mineralisation. The prevalence of so many positive and strong gravity features and coincident mineralised maficultramafic intrusions, gives us enormous confidence.

“Our team can triangulate on those intrusions that have the greatest potential for nickel discoveries. This is an exciting development and endorses our belief in gravity as an effective exploration tool. Focused and deep penetrating EM is our critical next task that will quickly identify the best intrusions for immediate drilling.

“We recently contracted NRG (New Resolution Geophysics) to commence Heli-borne Time Domain EM surveys in early July. This means we can quickly prioritise the drilling of our best targets in August.

“We consider the processes we have instigated will be the key to unlocking the potential of our dominant ground holding in the globally significant East African Nickel Belt. I am looking forward to reporting on the development of the exploration activities and our further successes over the coming weeks and months.”

High-density signatures above 0.75mGal are interpreted to indicate the presence of underlying bedrock mafic-ultramafic intrusions (similar to those that host the world class Kabanga and NovaBollinger nickel sulphide deposits) that when supported by other exploration indicators (Ni/Cu in soil and EM signatures) are ranked as high priority exploration targets.