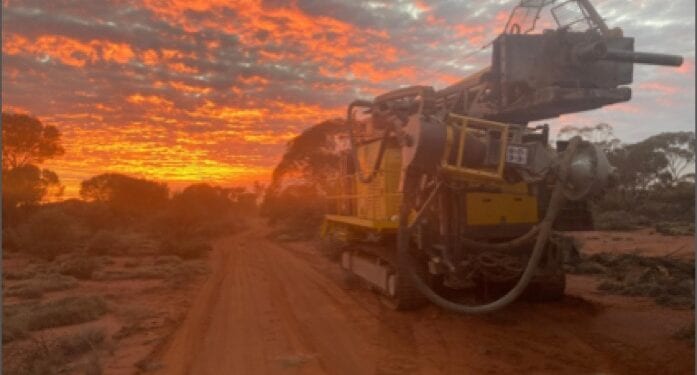 The 1,000m drill programme will be Auroch’s first phase of exploration on these prospects after entering into a binding agreement with Jindalee Resources to earn up to 70% of a four tenement package.

The two prospects are situated on the tenement E36/895, which is contiguous to the company’s 100%-owned E36/899 tenement that hosts the Horn nickel sulphide prospect.

Historic RAB drilling on both prospects identified fertile nickeliferous ultramafic units in the weathered and transition zones, with the best intercepts including:

Managing Director, Aidan Platel, said Auroch has utilised this wide-spaced drill-hole data to map out a footwall ultramafic – basalt footwall contact over 1.3km long which will now be tested for nickel sulphide mineralisation.

The drilling will aim to test the modelled contact within fresh rock at a down-hole depth of approximately 100m. Three holes have been planned at the Firefly Prospect and two at the Sinclair North Prospect.

All holes will be cased to allow for follow-up DHEM surveys to identify any strong conductors in the areas such as potential massive nickel sulphide mineralisation. Drilling is expected to be completed within two weeks.

The second phase of exploration at the Valdez Nickel Prospect has now been completed. Four RC holes for 1,478m were completed and all four intersected thick fertile ultramafic units up to 180m thick (down-hole width). The drill-holes are currently being logged and sampled, and will be surveyed with DHEM next week, with all results to be used for targeting for the next phase of exploration.

“We are excited to commence our first phase of exploration at the Firefly and Sinclair North Prospects, where excellent nickel results in the weathered profile from historic RAB drilling have never been followed up with deeper drilling,” Mr Platel said.

“We are also very encouraged by the potential at the Valdez Prospect following completion of our maiden RC programme. Each drill-hole has intersected thick packages of fertile ultramafic rocks within the modelled channel/embayment.

“This is a great initial result and we eagerly await the geochemical assays and DHEM results from this programme which will help us vector in on possible massive nickel sulphide mineralisation.

“Our aggressive yet systematic exploration programme continues to gain momentum, with an RC programme to test channel targets at the Saints Nickel Project to commence later next week, followed by a significant drilling programme at the Horn Prospect of the Leinster Nickel Project to begin in early October, aimed at converting the historic nickel sulphide resource estimate to be JORC (2012)- compliant.”