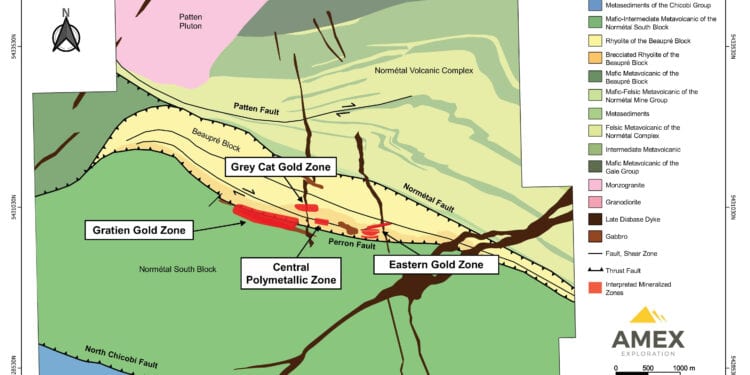 Amex Exploration Inc. (TSXV:AMX) has achieved a significant vertical depth expansion of the High Grade Zone (HGZ) of the Eastern Gold Zone, of the Perron property in northwestern Quebec, Canada.

Highlight results from the HGZ include:

Executive Chairman, Jacques Trottier, said gold mineralization has been traced over 350 metres along strike, from near surface to over 1.1 km vertically and averages approximately seven metres of width (core length).

“Since discovery, my team and I have been convinced that the HGZ is a robust mineralised system that extends to significant depths. With these drill holes we have confirmed that the system carries high grade gold to depth greater than 1 kilometre vertically and is continually strengthening as we go deeper,” Mr Trottier said.

“Of particular interest to me, is that the highest grade core of the system, (i.e. with a metal factor greater than 100 g/t Au by meter as shown in pink on Figure 2) is more than double the vertical distance at depth in comparison to the near-surface portion of the HGZ. “In addition, we have completed step out drilling at depth along strike and have identified significant visible gold mineralisation, which will expand the strike length of the system. We look forward to the receipt of these assays and to continuing to grow this continuous high grade gold system.”