No Ordinary Industry: The Strength of the Australian Mining Sector

No Ordinary Industry: The Strength of the Australian Mining Sector

To paraphrase 19th century economist David Ricardo, nations prosper by finding their niche in a world market and trading. Evidently, mining is one of the things Australia does best. The nation is richly endowed with abundance of natural resources that span the entire periodic table. Our highly skilled workforce, investment in advanced technologies and innovative practices have made the Australian mining industry a world leader that sets new standards in productivity, safety and environmental management.

Mining is Australia’s largest export industry and a key pillar of our economy. Together, the mining and mining services, equipment and technology sectors make up 15 per cent of Australia’s economy and accounts for 10 per cent of its workforce. Over the last decade, mining helped keep Australia’s economy growing while other countries fell into recession, supporting jobs and living standards for all Australians – particularly those in regional Australia. A key contributor to this economic success has been the Australian mining industry’s ability to attract international investment. Over the last decade, our investment in new mines, infrastructure and processing plants in Australia of $591 billion – based on Australian Bureau of Statistics data and adjusted for inflation – was more than double the amount the US government spent on the Apollo moon program.

While Australia benefited from capital inflows during this investment phase, even broader benefits are now being realised as these projects come online and the industry shifts into a production phase which is delivering prosperity and jobs through massive export growth. Australia’s resources exports have doubled since 2006-07. Resources exports – including minerals, metals, coal and petroleum were a record high $220 billion in 2017-18, up 11 per cent from the previous year due to rising exports of coal, gold, base metals and LNG.

Australia’s exports of goods and services surpassed $400 billion for the first time in 2017-18, due mainly to growth in resources exports which accounted for 55 per cent of total exports. This record export revenue
has underpinned a boom in operating jobs on mine sites following a challenging period of
low commodity prices from 2014 to 2016. The combination of higher commodity prices and production is also delivering a boost to company profits and contributing to higher tax collections and royalty payments.

The Australian mining industry has been a key source of government revenue over the last decade and has generated $103 billion of company tax, $81 billion of mineral royalties and $8.7 billion of payroll tax for governments in Australia that have funded the essential services on which Australians depend. Looking more closely at the record export values in 2017-18, iron ore remained Australia’s largest source of export revenue, despite lower prices, with $61.4 billion shipped in 2017-18. Australia is the world’s largest supplier of iron ore and leads the world in the deployment of new technologies.

The remarkable achievements of the Australian iron ore industry can be measured by the fact that the amount of ore it ships each year (e.g., over 800 million metric tonnes) is enough to dig the Panama Canal. The record year of resources exports was also driven by new record export values for a number of commodities.

Coal exports were only just behind iron ore, reaching a new record high of $60.1 billion in 2017-18 – up 11 per cent or $5.9 billion from the previous year. Gold exports including mined and refined gold set another record for export values with $20.1 billion of the precious metal shipped in 2017-18 (the first time in Australia’s history that gold exports have exceeded $20 billion). 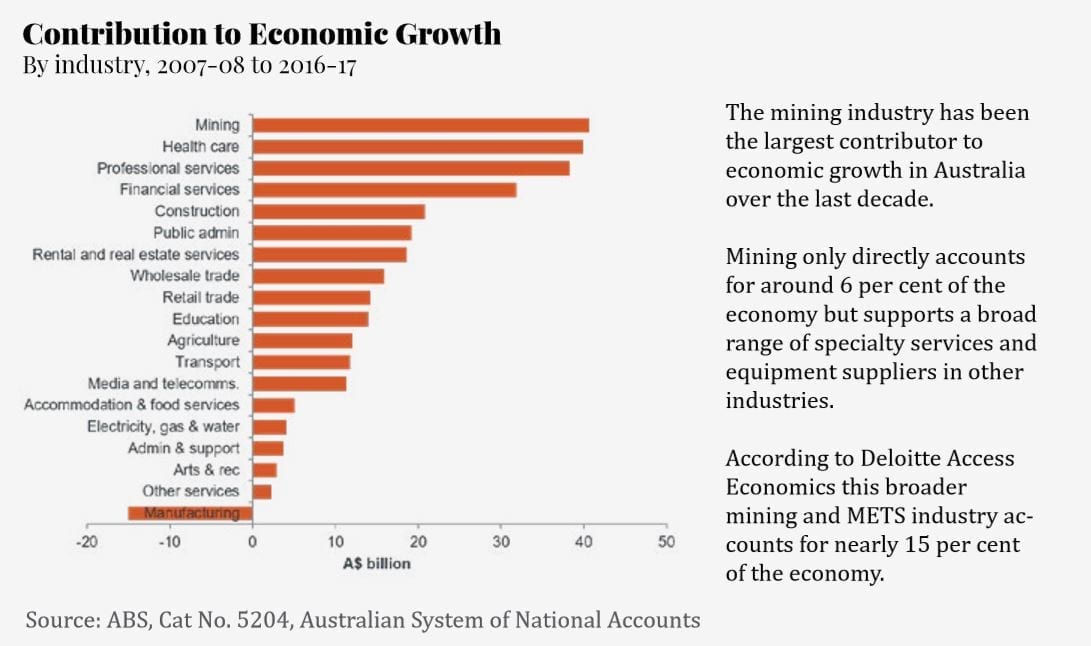 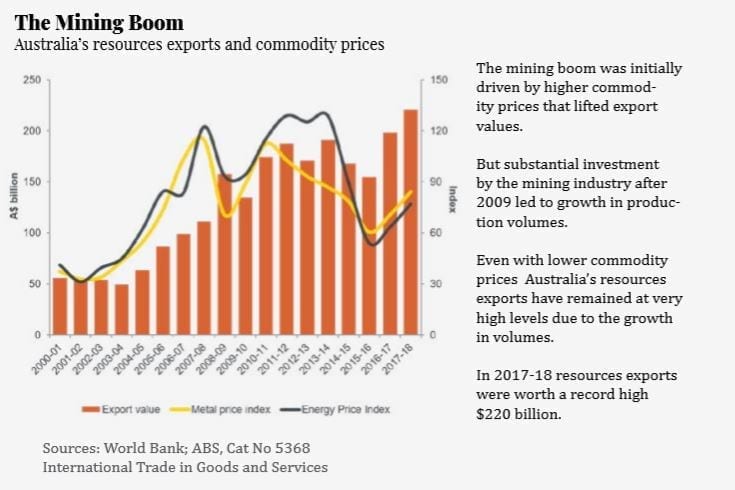 Exports of base metals and other minerals showed strong growth as a result of higher commodity prices and totalled $38 billion in 2017-18, also a record high. Based on market indicators and the confidence of our member companies, the MCA expects a continuation in the strong performance of the Australian minerals industry in the next few years.

As the economies of highly populated countries in Asia continue to grow, steel and iron ore will be in high demand. Just as we have seen with China over the past 20 years, the economic growth in India and South-East Asia will require increasing amounts of steel. China will also remain a key producer and consumer of steel with its Belt and Road initiative requiring significant investment in steel-intensive infrastructure projects both in China and around the region. Australia is also poised to seize future opportunities for minerals resources that will come from growth in new consumer, energy and transportation technologies around the world.

gWe have extensive resources of the rare earth elements, base metals, lithium and precious metals that are the essential materials in smart phones, electric vehicles, modern energy systems and industrial machinery.

Gold – one of Australia’s oldest mining export industries – is increasingly being used as a component in modern consumer electronics products such as smartphones and in the circuitry of electric vehicles. Australia is also the world’s largest lithium producer, with several new mines and processing facilities under development that will ensure Australia remains a key part of the lithium supply chain for years to come. This means maintaining a competitive minerals sector is essential for Australia’s continuing economic welfare and future employment opportunities.

It is clear that the world class Australian minerals sector cannot afford to take its strong performance or future prosperity for granted. We are proud of our strong commitment to sustainable development and responsible environmental stewardship. Mined land represents a small percentage of Australia’s land mass, yet Australia’s minerals industry takes its responsibility as a temporary custodian of this land seriously. Workforce health and safety is the mining industry’s top priority. The minerals industry is committed to becoming free of fatalities, injuries and industrial diseases and the principle that every individual – regardless of where they work, whether as a direct employee or contractor, and whatever tasks they undertake – should have the same high standard of workplace safety. Australia’s comparative advantage in mining is its high-skilled workforce. The mining sector employs more geologists and geophysicists as well as metallurgists and physicists than any other industry. It is the third largest employer of chemical and material engineers, industrial and mechanical engineers and environmental scientists and the fifth largest employer of surveyors. Australian mining companies are also world leaders in innovation – investing in sophisticated new technology to improve performance and create the jobs of the future.

These developments are improving productivity, safety and efficiency in the Australian mining sector, which already leads the world in innovation, health and safety and productivity. In a survey of MCA member companies, 70 per cent of respondents cited ‘R&D and adoption of new technologies’ as important or very important to achieving future improvements in productivity.

In representing Australia’s exploration, mining and minerals processing industry, the MCA promotes the industry, its economic and social significance to Australia and the critical role that mining plays in producing commodities that are the essential elements of life. We advocate for policies that support the efficient and sustainable development of Australia’s resources and thereby increase national prosperity, representing the industry in government and other forums. In this context, it is clear that Australia could do more to improve competitiveness compared to other international jurisdictions.

A global survey conducted by the Fraser Institute and released in March this year showed that Australian states are declining in attractiveness as potential mining investment destinations. The declining policy competitiveness of many Australian states revealed by the Fraser Institute shows governments have to do much more to retain competitiveness for our mining sector against rising international competition. Australia’s world-class mining sector is constrained by over-regulation, red tape and duplicated environmental laws across most jurisdictions – all of which limits job creation and prosperity, especially in regional communities.

Despite the recent upswings in exploration expenditure in Australia, our share of world exploration expenditure has been declining over the past 20 years. Private sector investment in exploration will not occur if the prospects of developing an operational mine are poor because of excessive regulation, inflexible workplace relations practices and high tax rates. There is significant duplication between State and Federal jurisdictions that could be streamlined to speed up assessment and approval processes.

wProhibitions and triggers within federal legislation relating to nuclear activities have already had an impact on uranium investment within Australia with no sign that this will improve in the near future. Improvements in the regulation of workplaces are crucial because existing rules lock in poor practices that discourage investment, hinder productivity and innovation, and put high-wage jobs at risk. Since the standard of living of all Australians depends on productivity growth, policies and regulations should encourage firms to invest in capital and allow them to manage the use of that capital efficiently.

While Australia is well-placed to supply growing minerals and energy markets in emerging Asia, this opportunity is not guaranteed. In particular, stable and internationally competitive tax settings are essential for stimulating business investment, especially in capital-intensive industries like mining. In addition, the future success of the minerals industry will depend on highly skilled and technologically-literate experts including operators, engineers, environmental scientists and geologists.

The opportunities for Australia’s mining industry presented by new technologies and automation will only be fully realised by inspiring the next generation to pursue science, technology, engineering and maths (STEM) disciplines. 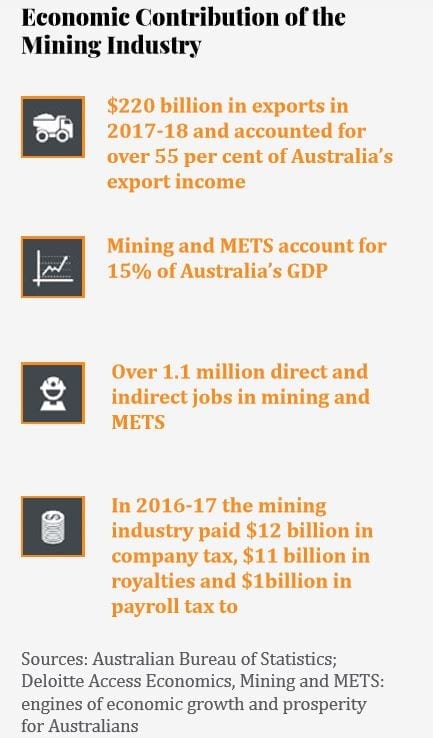