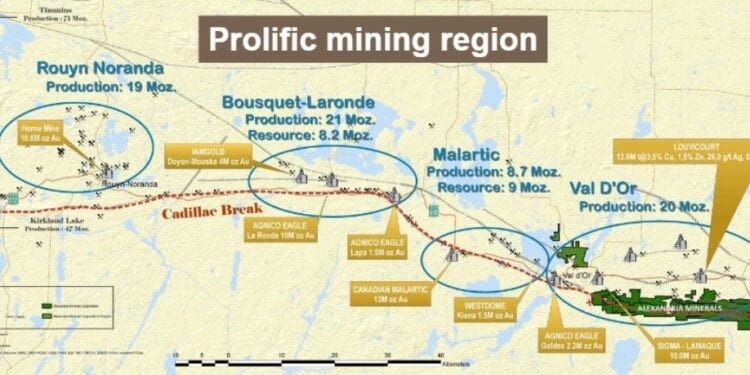 In May 2019, small gold exploration company Alexandria Minerals (TSX-V: AZX) announced its intention to be acquired by a Canadian company called Chantrell Ventures through an all shares deal, an 18% premium over the five-day volume weighted average price (VWAP). Weeks later, Agnico Eagle Mines (TSX: AEM) stepped in and made a better offer, only to be trumped by an even superior offer countered by Chantrell. In just two months, the share price and the market cap of Alexandria has more than doubled. What is so special about Alexandria, and what are the implications behind this?

Alexandria is a small gold junior and has been listed in Canada since 2006. It has been exploring for gold deposits which will hopefully prove economically viable. The company has a major focus on Quebec, most notably with its flagship project Cadillac Break Property Group (acquired from Cambior and Aur Resources in 2007). The project stretches for 35 km along the Cadillac Break, a regional fault zone that has produced some 100,000,000 ounces of gold since the early 1900s. There are lots of gold mines around the region and along the trend.

Alexandria has defined slightly more than one million ounces of gold (at an average grade of > 1.5 g/t Au) in total resources (indicated + inferred) at their flagship property among the three deposits.

Like many gold juniors, long-term shareholders suffered from the lacklustre gold price performance between 2011 and 2015, dwelling interest of mining equities from the investment community, and probably mis-steps made by the previous management.

Salvation for short-term investors came in May 2019, when Alexandria announced its intention to be taken over by Chantrell Ventures, a listing vehicle backed up by the muscle of Osisko Mining (TSX: OSK). Osisko Mining first made its name when it acquired the famous Malartic mine in northwestern Quebec, which was taken over by a joint venture set up by Yamana Gold (TSX:YRI) and Agnico Eagle Mines through a CAD $3.9 billion deal in 2014.

After winning big for themselves and their shareholders, the Osisko management came back in 2015, initially as a shell but later as a significant player, taking advantage of the bottoming market sentiment at that time and acquiring several small juniors. After this, they went on to form what it is known today as Osisko Mining with its flagship project Windfall Lake also in Quebec (more on this later).

The initial Chantrell Ventures deal with Alexandria was an all shares deal, with the exchange ratio implying that Alexandria’s shares were valued at CAD $0.04 per share, an 18% premium over the five-day VWAP. The Osisko team plan to inject cash into several properties currently owned by Osisko Mining, but have put this on the back burner due to the concentrated effort on the Windfall Lake project. Osisko will also change the name of the venture from Chantrell to O3 Mining, highlighting the ambition that they have for Chantrell a third time around.

Initially, the market – including the shareholders of Alexandria – was not very excited about the deal. Several investors purchased shares of Alexandria at much higher levels, and they are still losing big regardless of if the acquisition price is equivalent to 4, 5 or 6 Canadian cents. There was a time when Alexandria was trading at just CAD 3 cents per share after the acquisition news, which leaves over 30% of arbitrage trading profits for the smart money if the deal proves successful. 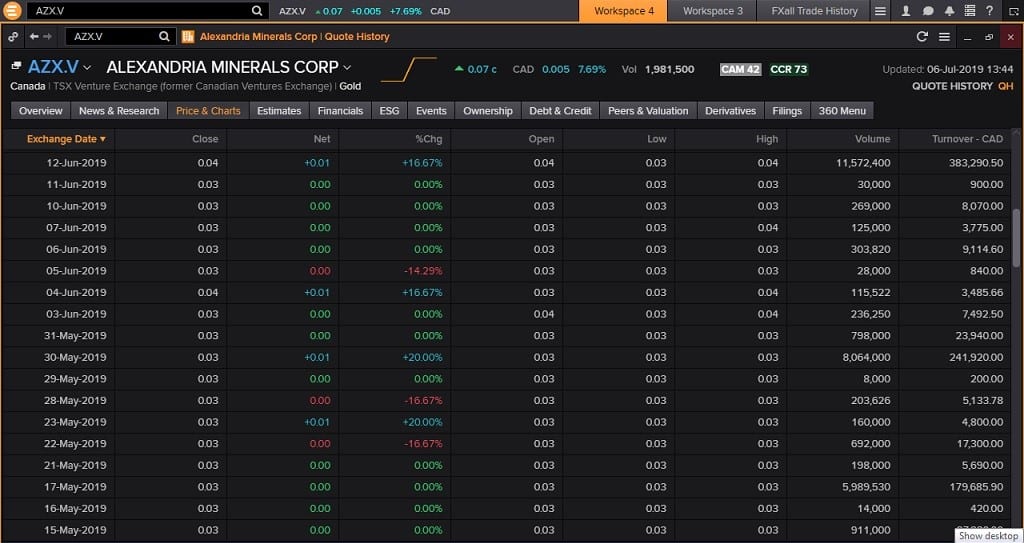 The window of the 30% arbitrage trading opportunity lasted from 14th May until 11th June, so many are wondering why anyone would want to sell at CAD 3 cents, a discount to the offer? In fact, the lowest trading price was CAD 2.5 cents during this period, which indicates a general lack of market interest in gold equities in the mining space.

On the 13th June, Agnico Eagle Mines, which already holds 8% of Alexandria’s equity stake, stepped up by offering a CAD 5 cents per share cash or a combination of cash and Agnico Eagle’s shares. The market become more aware of Alexandria’s potential, wondering if a higher counter offer would come from Osisko.

Agnico Eagle said that acquisition would allow it to consolidate an additional 14,819 hectares of mining claims that cover approximately 35 km of strike length along the Cadillac Lake break region. “Agnico Eagle has a long history of involvement with Alexandria, both as an equity investor and through the purchase of the Akasaba West property in 2014,” said Alain Blackburn, Agnico Eagle’s Senior Vice President for Exploration. “We believe that the key Alexandria properties are highly prospective and underexplored and could potentially provide future sources of ore at our nearby Goldex mine.” The Goldex is an underground mine which produced 121,167 ounces of gold, at a cash cost of $646/oz, in 2018.

Eager to not to disappoint, on 27th June Osisko (Chantrell) counter-offered with an all shares deal equivalent to CAD 7 cents per share, provoking a cheer from the market. The arbitrage trading window has closed for now, unless someone files in a higher offer which is still possible.

In under two months, the fight for Alexandria resulted in the price of its share jumping from CAD 3 cents to CAD 7 cents, a 133% appreciation. While long-term shareholders may still be underwater, at least they have hope that the acquirer (O3 for now) will continue to charge a higher share price so they can recover the loss made in Alexandria.

What Does This Tell Us? Why Do We Think This Deal is Important?

Firstly, this deal indicates the absurdity of the valuation that the general market is offering for mining equities, especially for junior exploration companies. The valuation of an exploration company does not suddenly double without touching any meaningful milestones (such as drilling a discovery hole). Both Agnico Eagle and Osisko must have done due diligence, including assessing the potential of Alexandria’s properties, to come up with a reasonable valuation (their offered prices are likely to be below the true, fair valuation).

To get a sense of how market valuation of large mining producers compares to that of physical metals, the gold-to-Xau (Philadelphia Gold and Silver Equities Index) ratio metric is often used. In short, the higher the ratio, the more undervalued the mining equities are compared to metals.

With the recent gold price hovering around the $1,400/oz level, the gold-to-Xau ratio is trading at around 16.8x. The last time the gold price was trading at similar price levels was in 2013, only, back then, the gold-to-Xau ratio was standing between 12x and 13x. Despite the recent gold price standing at similar levels, the ratio indicates that much of the love from the investment community towards the gold mining sector has yet to return

Secondly, the Osisko team has a great track record, and you better believe that whatever they choose to buy has some merits. The current flagship project of Osisko Mining is the Windfall Lake property, which was originally owned by a gold junior called Eagle Hill Exploration. Eagle Hill managed to prove up to 1.35 million ounces of gold (at an average grade of 7g/t Au) as total resources in the project, but the market cap was only trading at around CAD $10 million, equivalent to CAD$7 per ounce resource. Today, after taking over Eagle Hill and conducting several rounds of successful drilling, Osisko Mining’s market cap is equivalent to CAD $10 billion, with Windfall Lake’s total gold ounces standing at 3 million (at an average grade of more than 7g/t Au). Osisko has already done a pre-feasibility study on Windfall Lake to demonstrate its initial economics, and has decided that its deposit will be mined by underground methods. 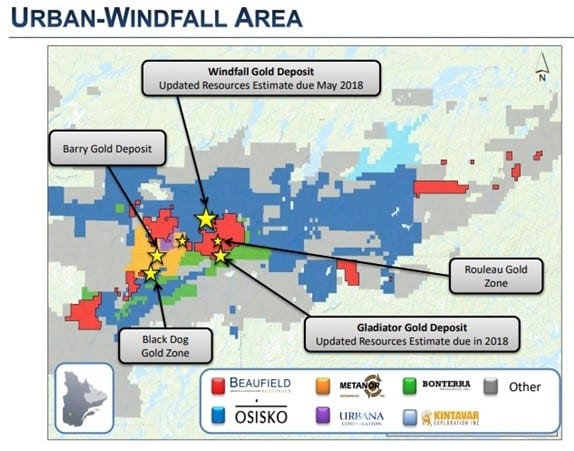 However, Osisko is not the only player in the Windfall Lake area. There were other companies working in the region at the time, including Bonterra Resources (TSX-V: BTR), Beaufield Resources (TSX-V: BFD), and Metanor Resources. In 2018, Metanor and Bonterra merged together to become the new Bonterra. hey have recently updated their total resources to 1.2 million ounces shared within three deposits. Beaufield was acquired by Osisko but, before that, they conducted a joint venture with Bonterra, gaining the latter access and rights to work on some of their properties in the area. Currently there are ‘only’ 4.2 million ounces of gold resources that have been defined within the region, but there’s a chance that there are more waiting to be discovered. the high density of drilling platforms in the area alone is proof of the sound interest in the region. In addition, Canada currently holds one of the lowest cost-per-gold-ounce in the world, and its mining-favourable government policies nurture a good investment environment.

Alexandria was not the only prey in the region. While fighting over Alexandria, the Osisko management team concurrently made a deal with Chalice Gold Mines (ASX: CHN), an Australian/Canadian dual- listing company that also operates in the region. Chantrell has offered to purchase Chalice’s Quebec gold projects (a total of less than 200,000 gold ounces in total resources, at an average grade of above 4g/t Au) for its shares (which will become O3). The deal is equivalent to CAD 12 million (which is equivalent to approximately CAD $60 per ounce in acquisition cost), and would allow Chalice to retain 1% producing royalty on the properties.

Photo: A picture of the author with Tim Goyder, the Chairman of both Liontown Resources (ASX:LTR) and Chalice Gold, at a 121 Mining Investment event in Hong Kong 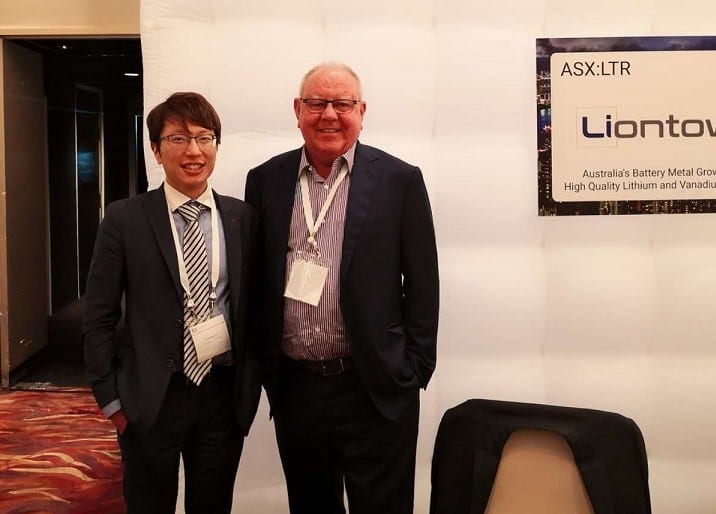 It is now fairly obvious that, while the Windfall Lake is still the focus of the current Osisko Mining, they have already planned for the next vehicle in O3: the Cadillac Break. Area plays around the surrounding area has already caught the attention of the investment community.