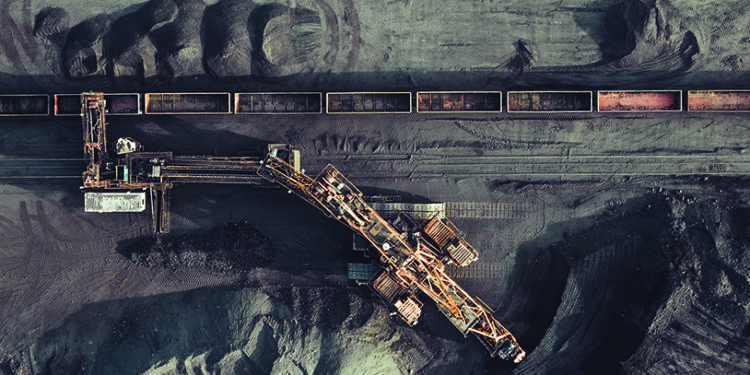 Tin was the best performing base metal on the LME in 2018, with the 3-month price ending the year down just 3% over the entire year; this is significantly better than the next closest metal, nickel, which lost over 15% of its value. Net growth in demand for tin-using products, combined with supply tightness, helped keep the price relatively stable. At the start of the year, tin prices rose steeply by over US$ 3,000, but prices across the metals complex fell in the second half of the year following poor global macroeconomic sentiment regarding the US-China trade tensions, as well as poor economic indicators in the largest global economies.

Tin use is generally divided into four main sectors: solder, chemicals, tinplate and leadacid batteries. While many people think of tin’ as a food container, around 50% is in fact used as solder. Over the last decade, tin has benefitted from EU regulations which prevent the use of lead in solder, leading to lead-free solders that contain much more tin. This tin connects all electronics, and so increasing demand for technology has been – and will continue to be – beneficial. Miniaturisation of electronics remains a threat, although the latest data suggests this may be stabilising outside China. Chemical uses of tin are growing steadily, mainly in PVC and other polymers in the construction and automotive sectors. Leadacid batteries have also grown to become the fourth-largest tin use in the last decade, with new demand for high performance batteries, such as those used in cars with “Stop-Start” technology, accelerating tin use.

2018 was a year of two halves in terms of tin use. Throughout the first half of the year, forecasts of tin consumption were particularly bullish, yet poor macroeconomics in the second half of the year muted these expectations. China, where 45% of all tin is used, saw its manufacturing Purchasing Manager’s Index (PMI) indicator fall below the critical value of 50.0 in the third quarter, indicating market contraction. Overall, tin consumption is estimated to have grown by around 3% in 2018.

Tin supply originates from four main regions, although most refined tin is produced in Asia. China and Indonesia dominate this region, with some 46% and 23% of the global market, respectively. Although most Chinese tin is consumed domestically, both countries faced supply tightness during 2018, causing LME tin stocks to drop to new historical lows in January 2019.

Indonesia is historically prone to supply disruption, as regulations surrounding export licenses– which are renewed every six-months – are often changed at short notice. These licenses require verification by a competent geologist in order to confirm the legality of the ore and refined product. This verification process was managed by two companies: PT Surveyor and PT Sucofindo. However, in October 2018, all licenses verified by PT Surveyor were invalidated, leaving the 33 private smelters unable to export refined btin, cutting off two-thirds of Indonesian supply. This situation continued throughout 2018 and into 2019, when it was announced in March that a new bonded warehouse contract on the ICDX would be certificated by both PT Surveyor and PT Sucofindo. In China, disruption to the tin concentrate supply chain lowered refined tin production. Myanmar has been a major supplier of tin concentrate to Chinese smelters since it emerged as the world’s third-largest producer in 2014. However, despite proving analysts wrong and consecutively increasing concentrate production year-on-year, tin mining in Myanmar appears to have finally peaked, with estimations of tin-in-concentrate down some 14% in 2018, compared to 2017. Reduction in tin concentrate supply has forced many Chinese smelters to close for maintenance.

Overall, refined tin production fell by around 1% in 2018, with the major losses in Asian production being offset somewhat by increased production in South America. Overall, the tin market recorded a deficit of around 12,000 tonnes in 2018. 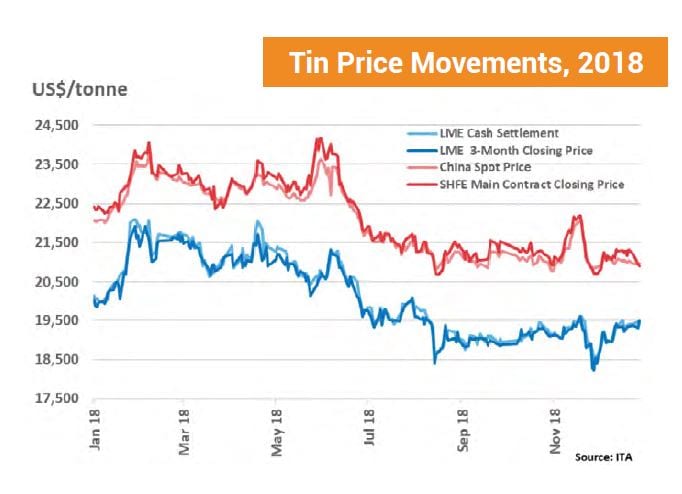 The International Tin Association (ITA) is forecasting a broadly stable year ahead for the tin price, despite the bullish start to the year. In the short-term, both supply and demand appear weaker. Demand is likely to be muted while uncertainty surrounding the US and China trade deal continues, and this will be exacerbated by the poor manufacturing growth in the world’s largest economies, along with the overall slowdown to the Chinese economy. The falling supply of Myanmarese tin concentrate to China looks to be a long-term factor impacting the production of refined tin, while the enforced closure of the Baiyinchagan mine in Inner Mongolia will cause short-term supply disruption. The combination of these market forces will see the market deficit reduce by around 2,000 tonnes.

While the short-term effects of global macroeconomic uncertainty and poor economic indicators are potentially negative for tin, the medium- to long-term future looks particularly bright. Recent research by MIT, in collaboration with Rio Tinto, suggests that tin will gain the most from the upcoming technology super-cycle, compared to other metals. The ITA has been looking at this in more detail and is working on quantifying this expected new demand. Lithium-ion batteries are the newest hot topic for tin, with up to nine possible tin technologies, mainly in new anode electrodes, being evaluated. In a major new work, the ITA has estimated the potential new tin use by 2030 that these technologies represent, could reach around 60,000 tonnes of tin, if they can gain a market share. Major carmakers are filing new patents, including new generation tin-silicon anode materials.

Tin electrodes are also leading the way in the next generation of sodium-ion, magnesiumion and even potassium-ion batteries. Uses in liquid metal batteries, redox flow batteries and fuel cells are also possible.

Furthermore, photovoltaics could also present a major tin use by 2030. Solar cells are connected by a solder-coated copper ribbon, which uses around 90 tonnes of tin per gigawatt (GW) capacity. Estimations by the International Energy Agency suggest that installed photovoltaic capacity will grow by some 400 to 800 GW by 2022. However, energy storage and renewable energy may be just a small fraction of the potential for new tin use – most may come in advanced robotics, computing, telecommunications, and electric vehicles, where tin will provide the vital ‘glue’ to connect them all together. 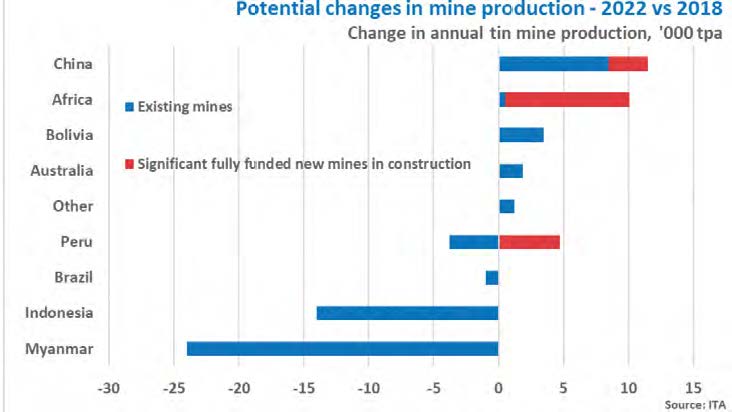 In recent years, finding investors for new tin projects has been particularly difficult for developers due to lower tin prices. However, mine head grades around the world are beginning to fall as the easy to extract material is removed, while Myanmar, a major supplier of tin concentrate to China, appears to be declining. By 2022, mine production is expected to fall bysome 10,000 tonnes. Moreover, the tin market has been in a deficit for four years, and with demand for tin set to grow significantly by 2030, new concentrate supply appears necessary.

The ITA works with several junior mining companies to promote their exploration and development work; many of these projects are nearing production and will be looking to fill the inevitable ore demand. Much of this new mine production is in Africa or Australia, with several projects ramping up to full-scale production within the year.

The largest of these near-production projects is the Bisie mine in the Democratic Republic of Congo, owned by Alphamin Resources (TSXV: AFN). The area was a major source of tin ore prior to 2010, accounting for up to 75% of the DRC’s tin output. Since Alphamin gained control of the project, extensive exploration work has been undertaken at the Mpama North prospect, as well as additional exploration targets. The mine is now ramping up to production, with the processing plant on track to be completed by the end of March 2019 and the project on course to reach nameplate capacity of some 9,000 tpa in mid-2019.

AfriTin Mining (LON: ATM) also aims to begin production from the Uis project, Namibia, this year. The mine was originally developed by Iscor of South Africa in 1911 and was the world’s largest hard-rock tin mine, producing for some 80 years. However, the mine was closed during a period of depressed tin prices. During December 2018, AfriTin undertook the first large-scale blast of mining material, which was stockpiled in preparation for processing. When the mine reaches maximum capacity, it will produce some 800 tonnes of tin concentrate annually. On the other side of the world, in Australia, new tin projects are also beginning to move towards production. Small-scale mining began at Aus Tin Mining’s (ASX: ANW) Tasmanian project in 2016, but since then, the project has been approved for Level 2 operations, featuring a tailings dam and a processing plant, and operations at the new open pit, Granville East, began in February 2019. The transition to Level 2 operations is projected to result in an increase in tin-in-concentrate output to 550 tpa.

Despite combined production of over 10,000 tonnes, declining production from existing mines means that overall mine production will remain broadly flat in 2019. Although demand for tin looks set to fall this year, further new production will still be required to meet future demand.

Beyond 2019, there are several other promising near-term projects. These include Strongbow Exploration’s (TSXV: SBW) South Crofty project, located in the historical mining area of Cornwall, England. The project was acquired by Strongbow in 2016 following the definition of an NI 43-101 compliant mineral resource, and, in early 2017, a Preliminary Economic Assessment (PEA) was released.

The historical workings require dewatering, but during the 18-month process, Strongbow hope to complete a feasibility study and bring the project to a production decision. Further out, Achmmach (Kasbah Resources (ASX: KAS)), Oropesa and Cleveland (Elementos (ASX: ELT – See profile on p.16) and Syrymbet (Tin One Mining (JASE: SRBT)) are progressing towards breaking ground. Achmmach, located in Morocco, has progressed past the Definitive Feasibility Study stage; Kasbah and its joint venture partners are looking to secure funding for full implementation, with productive slated for 2020. Syrymbet, claimed to be the world’s largest undeveloped tin deposit by Tin One Mining, is currently in the Definitive Feasibility Study stage, with the report expected to be completed by the end of 2019. Stripping work is due to begin in May, with investment in the development of the project expected to reach around $10 million. According to the local Kazakhstani government, comprehensive commissioning will be completed in 2021.

In a recent investor presentation, Elementos revealed that its portfolio of tin projects is moving towards production. A Definitive feasibility study is currently being produced for the Spanish Oropesa project, which was acquired by Elementos in 2018. With environmental studies complete and mining license application already lodged, Elementos has scheduled initial production for 2022. Production at the Tasmania-based Cleveland mine will begin a year later, initially from the retreatment of tin-copper tailings, followed by the re-establishment of the historical underground mine.

The tin market has been aware for some time that new ore sources would be required to meet demand, yet many of these projects were not viable at previous market prices. Tin is now being viewed as one of the metals most critical to the upcoming technology supercycle, and even stronger demand is expected. Tin’s strong start to the year has meant that many exploration-stage projects have been re-evaluated, and investors who took the plunge earlier in the market cycle appear to be getting rewarded for the risk. 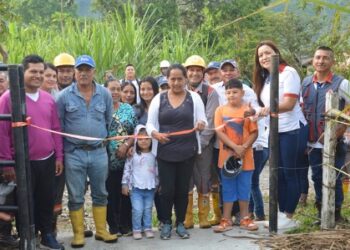 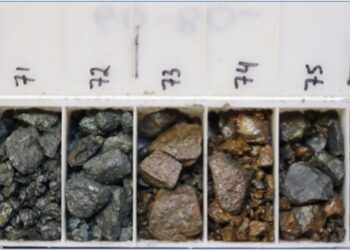 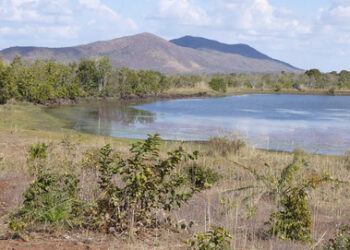 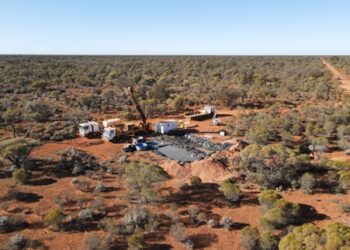 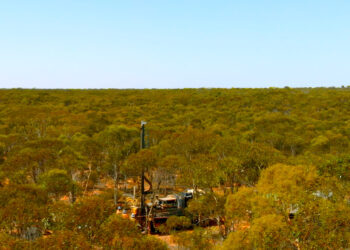