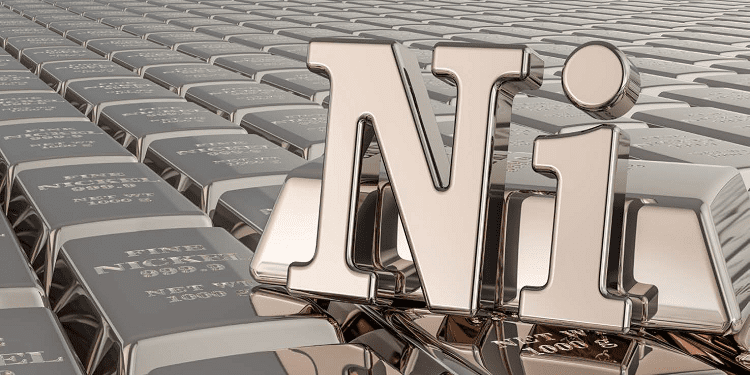 The outlook for cobalt and nickel, along with lithium, is being transformed by the electric vehicle (EV) revolution. This also coincides with the roll out of the energy storage system (ESS), which is set to be another significant user of lithium-ion batteries.

While the outlook for lithium-ion batteries and battery raw materials is overwhelmingly bright in the years ahead, numerous cross currents have been affecting the market this year. Consequently, the current situation and near-term outlooks are quite mixed for the different raw materials in batteries.

Cobalt, like lithium, experienced a significant supply response in 2018 and, as a result, prices came under downward pressure. The Fastmarkets’ standard grade in-warehouse Rotterdam price was considered the industry benchmark, falling to a low of USD 12.10 per lb in late July from a multi-year peak of USD 44.45 per lb in April 2018.

The primary reason for such a sharp price correction was the increase in production capacity due to producers preparing for the bullish outlook for demand from the EV revolution. Glencore led the supply response by expanding cobalt output at its Mutanda mine in the Democratic Republic of the Congo (DRC) from 16,000 tonnes in 2015 to 27,300 tonnes in 2018. In 2018, Glencore also restarted its expanded Katanga mine in the DRC, where capacity increased to 34,000 tonnes. The 2019 production target of 17,000 tonnes was up from production of around 3,500 tonnes before the mine was temporarily closed in 2015 due to low prices.

In addition, in late 2018 Eurasian Group Resources (ERG) started to ramp up production at its Roan Tailings Reclamation (RTR) plant, which has a 20,000 tonne per year capacity, although first-stage production was expected to be around 14,000 tonnes. Needless to say, such large-capacity increases in a 120,000-tonne market led to a price collapse, and it looked as though prices would stay down until demand caught up with supply again.

However, low prices in the summer led to another twist; in late July, Glencore announced that it will be closing its Mutanda mine for two years starting in 2020. The closure of such a large mine will reduce supply significantly -Mutanda is expected to produce 24,000 tonnes of cobalt this year, which will account for some 17 percent of global mine production. Still, the loss will be partially countered by the continued ramp-ups at Katanga and RTR, and the start up of some new, smaller projects in central Africa. 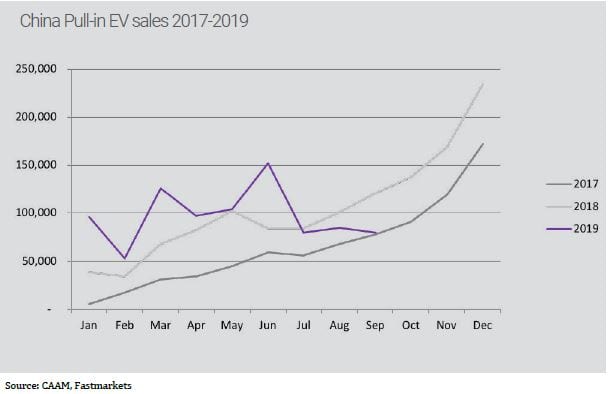 While excess supply was a negative factor for cobalt prices, the situation was not helped by slower-thanexpected demand from EVs. Chinese EV sales have been adversely affected by a number of developments including the fallout from the United States- China trade war and another round of Chinese government subsidy changes that came into effect during the second quarter of 2019. The trade war has led to a slowdown in Chinese and global growth, and the longer it has lasted, the more business and household confidence has dropped. In turn, that has meant that the buying of largeticket items, such as cars, has suffered.

Total vehicle sales in China have been in decline for 15 months. In the first nine months of 2019, they were down 10.3 percent from the sales during the same period in 2018. While EV sales held up well to start with and showed resilience to the fall in total vehicle sales, there is little doubt that they have been negatively affected by the weaker economy more recently. It is also very clear that the full impact of this year’s subsidy changes in China have had a big impact on EV sales. EV sales fell in July (-6.9 percent year on year), August (-12.1 percent year on year), and September (29.9 percent year on year). This has caused demand growth for lithiumion batteries to slow too.

Nickel: Tightness in Availability of Nickel Units for Battery Industry

For nickel, the situation is somewhat different in that stainless steel is the biggest user of nickel, consuming about 70 percent of production annually. Batteries consumed around 6 percent of nickel supply in 2018, up from 3 percent in 2017, but growth is expected to increase by around 25-30 percent per year over the 2018-2025 period. As such, nickel demand has a very bright future with strong demand from stainless steel and even stronger demand growth from batteries.

There is little doubt that the exciting development for the nickel market is related to how fast demand is set to grow from the lithium-ion batteryvindustry. Nickel demand for batteries is expected to rise from around 100,000 tonnes in 2018 to around 500,000 tonnes by 2025. The important takeaway from this is that the extra nickel required for batteries will be on top of that required to feed the already fast-growing stainless steel market. The stainless steel market can use all types of nickel, from nickel contained in stainless steel scrap and nickel pig iron (NPI), to ferro-nickel and refined nickel metal. To make the nickel sulfate that the battery industry needs requires either class 1 nickel, such as refined nickel metal ideally in briquettes and powder form, or the nickel intermediates that can make class 1 nickel, which tend to be produced via the high pressure acid leaching (HPAL) nickel-refining process.

That said, with batteries accounting for only 6 percent of consumption, it is the stainless steel industry that is likely to set the price direction in the near-term. Indonesia has brought forward its ban on ore exports to 2020, which is seen as long-term price bullish but may be medium-term negative. Indonesian nickel producers are likely to produce and export as much ore as they can in the September-December 2019 period, ahead of the ban, and Chinese NPI producers are likely to be willing buyers while they build up stockpiles. Good supply and availability in the months ahead are expected to exert downward pressure on prices. This has already started to happen, most notably in the second half of October when the London Metal Exchange three-month price fell back toward USD 16,000 per tonne from a high of USD 18,850 per tonne in early September.

Later in 2020, supply is likely to tighten but much will depend on how fast Indonesia is able to ramp up new NPI production, how easy it will be to export either NPI or stainless steel to China, and how quickly the Philippines and New Caledonia can ramp up output and exports to China.

The danger for the battery industry is that if Chinese stainless steel mills cannot get enough class 2 nickel feed, they may start to use more class 1 nickel. This could reduce the amount of class 1 nickel available for the battery industry. Since the Indonesian ore export ban was announced in late August 2019, LME nickel stocks have fallen at a fast pace from around 150,000 tonnes to around 84,000 tonnes. Therefore, it may be that the battery industry is stockpiling nickel in anticipation that there will be shortages before new projects focused on producing nickel (to make nickel sulfate) are commissioned.

At present, the market is relying on the start up of new HPAL operations in Indonesia to produce battery feed nickel, but there are concerns that the new HPAL plants will face start-up delays as many previous HPAL plants did. That said, if shortages raise nickel prices, there should be extra investment in NPI production and that, in turn, should help provide cheaper nickel units to the stainless steel market. This should mean that more class 1 nickel will be available to the battery industry.

To sum up, demand for EVs in China has hit a road bump while the market adjusts to lower or, in many cases, no subsidies and the spending appetite of many consumers and businesses around the world being negatively affected by the US-China trade war.

We see this slowdown as temporary and are confident that the long-term outlook for EVs and ESSs will mean strong demand growth for battery raw materials for decades to come. While headline numbers of EVs may have slowed in 2019, a breakdown of the numbers in most regions shows battery-only EVs are gaining market share over plug-in hybrid EVs. That means the average size of the battery per EV is getting bigger, meaning more battery raw materials are used in each unit of sale.

For nickel we expect increased tightness in availability for the type of nickel units the battery industry needs, while for cobalt we expect a more balanced market for cobalt hydroxide in 2020, but no shortage of supply since stockpiles have built up in 2018/2019.

Frontier Lithium Raises Half A Million Through Placement