In a note a few weeks ago I outlined a list of what I regarded as compelling bullish factors that will provide further momentum for commodity prices in 2018. They comprise ongoing US dollar weakness, a favourable global economic outlook, the emergence of inflationary pressures and good old fashioned market momentum. Encouragingly, both the fundamental and technical aspects with respect to metals are further supporting prices.

In this week’s note I’d like to look specifically at recent developments in the nickel market. Prices have just hit their highest level in two years. Benchmark LME nickel on the LME past $14,000 a tonne earlier this week, which is its highest level since May 2015 – representing a gain of more than 55% in a little over six months.

The nickel market is being driven by a combination of surging Chinese imports, tighter supplies and growing fund interest. Just this week Wood Mackenzie estimated that the nickel market would see a deficit of between 80,000-90,000 tonnes during 2018, which is comparable to the market deficit last year.

Let’s look at the demand side first. Like most other commodities at present, China is the key factor as a result of the environmental clampdown by authorities that has significantly impacted production capacity. In all, China, accounts for around half of current global consumption, estimated at around 2.1 million tonnes this year.

As is the case with many other commodities, China is expected to ramp up imports. This process is already underway, with China’s nickel imports during the month of December surging to 41,315 tonnes – more than double what it was a year earlier. 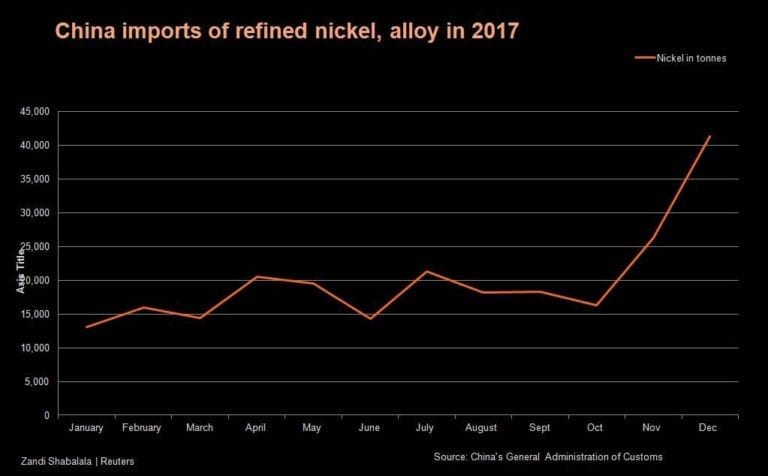 And what about nickel’s supply side. A major factor fuelling nickel’s latest rally has been the production statement from Canada’s First Quantum Minerals, which noted that its overall nickel output had fallen by 24% during 2017 to 17,837 tonnes as a result of its Ravensthorpe mine in Western Australia being shut since September.

Compounding supply-side concerns have been rumours of a possible force majeure at the Ambatovy nickel-cobalt mine in Madagascar – one of the world’s largest such mines.

Then we have the sliding the US dollar, which is boosting all commodities in terms of making them cheaper in other-currency terms. The dollar has fallen to a three-year low and recent comments by US President Donald Trump in his State of the Union address this week have done nothing to arrest the slide. A desire to maintain the competitiveness of US exports and boost manufacturing by the Trump administration will ensure that the US dollar remains weak.

Also interesting is the current level of fund interest in the nickel market. The recent price action accelerated after spot prices broke through a supposed key technical level around $13,000 last week, with many funds subsequently buying into the action. 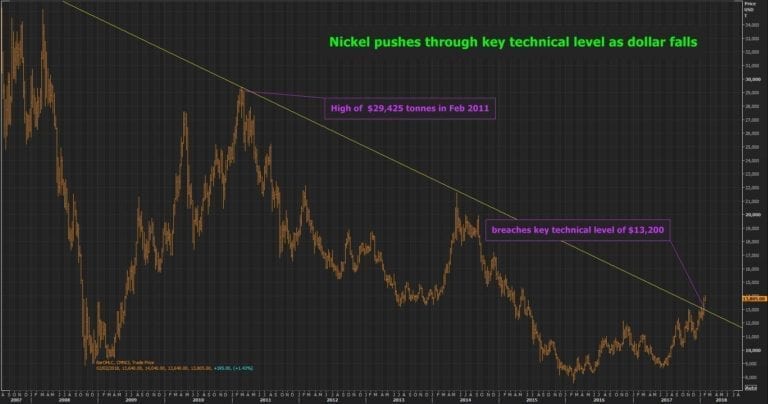 According to LME data supplied by Reuters, the current combined net long nickel positions of funds is the highest it’s been in 12 months – and more than three-and-a-half times the holdings in early December.

This is no doubt being driven by bets of rising demand as a component in EV batteries. Industry group Wood Mackenzie forecasts nickel usage in EV batteries at between 60,000-80,000 tonnes this year and 220,000 tonnes in 2025. UBS Group recently forecast that batteries will account for 500,000 to 600,000 tons of nickel demand annually by 2025. 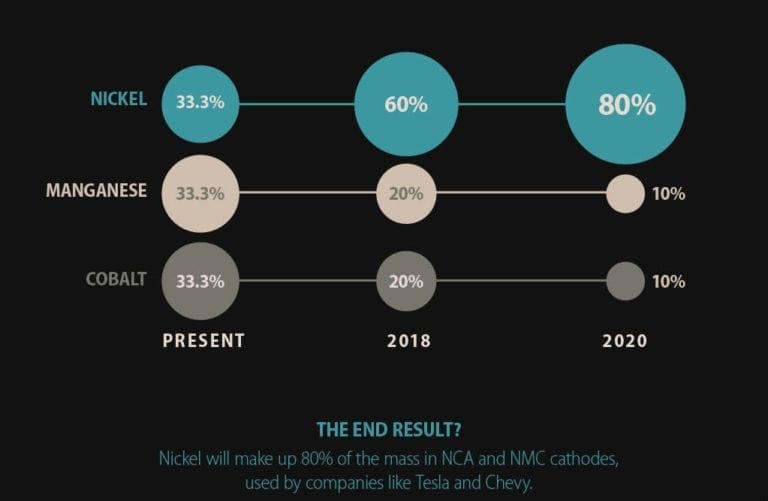 What’s interesting too about the graphic above is that it suggests a lessening proportion of cobalt in lithium-ion batteries. This is somewhat controversial and suggests technological advances that will allow for substitution, allowing for reduced cobalt usage.

Popular nickel, manganese and cobalt (NMC) lithium-ion batteries typically employ a ratio of 60% nickel to 20% cobalt and 20% manganese – or 6:2:2. Many groups, including South Korea’s SK Innovation, aim to change the composition of these cathode materials to 80% nickel, 10% cobalt and 10% – effectively a ratio of 8:1:1. Tesla is believed to be using an 8:1:1 ratio and is working with Panasonic to develop a battery with about 85% nickel.

Inflation Worries? Gold May Be the Solution

Inflation Worries? Gold May Be the Solution