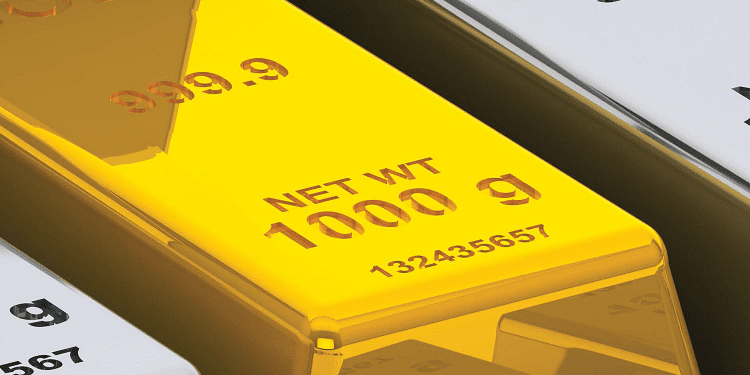 Gold and silver behave differently from other metals when it comes to responding to market forces. While gold can be considered unique as it is a currency as much as, if not more than, a commodity, silver definitely has a life of its own. It sometimes behaves as a base metal (usually when there is no discernible trend in gold), and at other times, when gold is showing a strong trend (either up or down), silver joins forces with its more illustrious precious partner. This year has been a good case in point. In the first five months of the year, gold was more or less flat, and silver initially drifted. Having failed initially to participate in copper’s early rally, silver did start to trade lower in line with copper. However, when gold took off, silver went with it and, as is usually the case, outperformed to the upside and then underperformed on gold’s retracement. 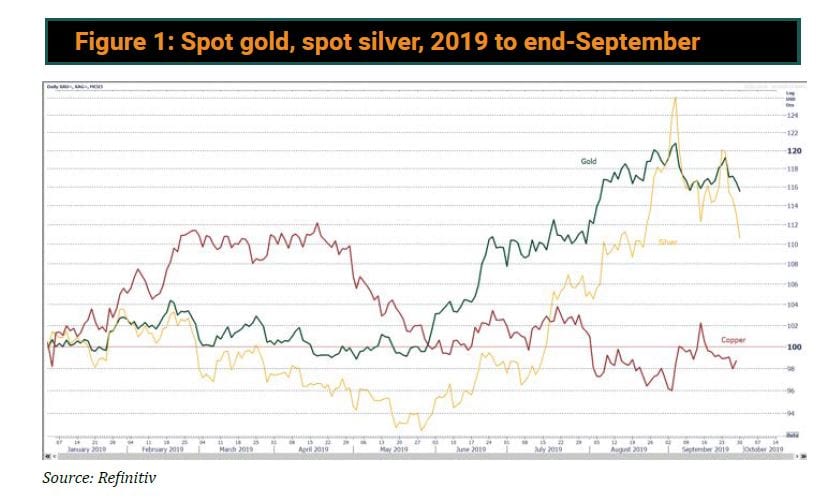 Silver has been something of a vagrant this year, switching from no-man’s-land into the base metals sector and then tying in with gold. Silver’s fickle character is due to a number of factors, but there are two key elements. The first is that silver has, in the greater scheme of things, no natural market clearing price since only 26% of silver mine production is from primary silver mines, with 38% coming from lead-zinc operations, 23% from copper, and 12% from gold (GFMS numbers). Further, except in times of extremely high prices, most silver scrap supply is also a function of past industrial activity, meaning that when scrap is added into the equation, only 22% of silver has an identifiable primary cost of production.

This tends to mean that it needs guidance from another variable in order to define a distinct price path as there is no natural market clearing price for the metal.

The second key feature is that silver tends to be classed as a precious metal because it has a history of acting as a currency, hailing back to ancient Greek times. This ties it in with gold; as does silver’s history as a metal of adornment in the form of jewellery. There is a key differentiating factor though; since the year 2000, jewellery has accounted for over 65% of physical gold (non-ETF) demand, but only 19% of silver demand.

We should also note that the dollar went on the gold standard in 1934 (until 1964) and US citizens were not allowed to invest in gold, so many of them turned to silver as a substitute. Silver still has a high profile in the United States as “affordable gold” and because it has a history of high volatility, a number of speculators and investors will gear up their gold positions by adding silver exposure. This can frequently become a virtuous circle, as demonstrated by the chart in Figure 1. It is almost axiomatic that in a bull market, silver outperforms gold and vice versa in a bear market. These key elements define why gold is frequently the key driver behind silver’s price. Frequently, when forecasting silver prices, a fundamental analyst will also forecast gold prices, as well as their trend, and derive an acceptable silver price by applying a change in the ratio between the two metals. Thus, if we look at the gold price and the gold:silver ratio since the year 2000: 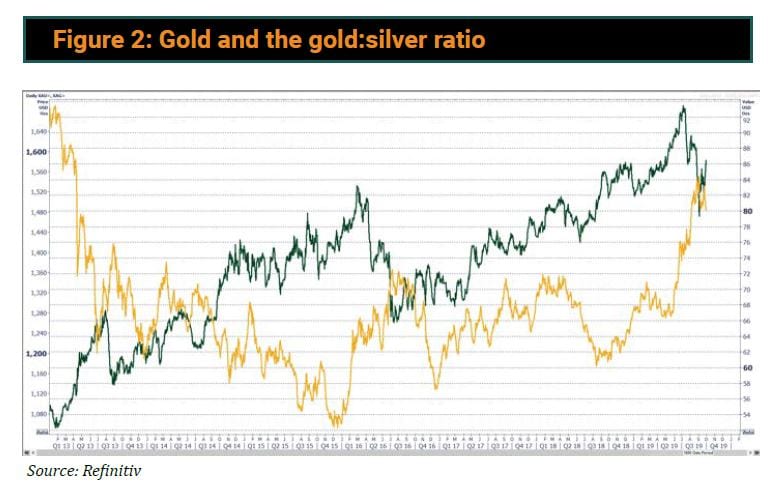 Now, let’s turn to gold. As noted above, gold has characteristics of a commodity and also trades as a currency. It is deep and highly liquid, and there are vast above-ground stocks of metal that are easily mobilised, whether in the form of privately-held gold bars or high-purity jewellery (“investment-grade jewellery”), in the official sector or as bullion in investor hands. Due to these important characteristics, gold behaves differently from other commodities. As it has a low correlation with other asset classes, it is also increasingly used as a stabilising element in investment portfolios, as the addition of a small amount of gold to a portfolio will increase the risk-adjusted return. The fact that gold is so readily mobilised is one of the key reasons why it is generally less volatile than a number of other asset classes. This, too, talks to its use as a mitigator of risk, as well as the fact that it is a non-fiat currency.

All of these elements mean that a fundamental analysis of the balance between traditional forms of supply and physical demand (e.g. jewellery, electronics, etc) is often regarded as a waste of time. However, this analysis is important as we need to understand where the gold is flowing to and from, and therefore what the likelihood of resale is in time of distress, high gold prices, or fresh purchase when prices have dipped or increasing geopolitical or financial risks make it attractive as a hedge.

With a range of different elements informing gold’s price moves, therefore, one of the key identifiable parameters as to what is driving the prices is ETF activity. It has transparency since the movements, or at least the majority of them, are published daily which makes them relatively easy to track. It is always instructive to monitor ETF flows, as they give a guide to fluctuations in sentiment or when prices are at an extreme, and when the technical picture on the charts is potentially at a key reversal level or teetering on the brink.

One exercise that we recently carried out threw up interesting results. Since gold took off at the end of May, the tonnage in the ETFs has increased markedly, prompting an analysis of the correlation between the spot price and the ETF activity. It comes as no surprise that the correlation is high this year, reflecting the massive preponderance of institutional (and by extension, OTC) investment, given the moribund state of the physical markets since June in particular. What is perhaps of more interest is that since 2004 (the first gold ETF was launched in late 2003), the overall correlation has also been remarkably high. The R-squared function for 2019 to date is 0.924, and for the period from the start of 2004 to date is almost the same, at 0.916. To validate these results, we ran “reality checks” on some individual years; in 2004, for example, when the ETFs were only just getting underway, the R squared was just 0.342, and in 2005, 0.754.

Silver, however, befitting its dual nature and intermittent behaviour as a primary investment vehicle, has a lower set of correlations. Since the inception of the silver ETFs, the R-squared is 0.125. From the start of this year to late September, the R-squared has been 0.816, which is very strong and reflects the closeness of the relationship with gold since the activity in their respective prices picked up.

Flows into the major gold ETFs (these numbers as monitored by Bloomberg) so far this year (to end-September) have reached 313t, of which a net 307t have been since the price bottomed out on 23rd April, but 333t since the price achieved lift-off on 28th May. So, it is arguable that ETFs were price takers for much of the year, but once physical demand fell away sharply as of late June and stayed relentlessly flat thereafter, the ETFs and professional investors have been even more the key behind the price moves.

This becomes a virtuous (or vicious, depending on one’s point of view) circle. Strong professional investment will help to keep prices high and deter the underlying physical demand, while the lack of physical demand also means that the price does not move as high as it might otherwise, given the strength in professional buying levels.

Ultimately, the lack of physical interest will start to have a more visible influence on prices. This is arguably what was happening at the end of September. There was a net inflow of 45t and USD 2.1 billion into the gold ETFs in September’s final week, including 22t and USD 1.1 billion on the 25th, when gold closed the LBMA pm auction at USD 1,528.75. However, thereafter this flow was reduced to a trickle with just seven tonnes over the next three days combined, and still no physical interest from elsewhere. As a result, the price dropped by USD 68 in three trading days.

At the time of writing (the end of September), reports from the field were suggesting that local consumers in a number of price sensitive countries, essentially in south-east Asia, have been waiting for a correction in the price before venturing back into the market. Experience has shown that on many occasions such a pullback becomes a moving target, with an initial target of “$x becoming $x minus y” when $x has been reached. During September, there did seem to have been some sporadic bargain hunting below USD 1,500 while USD 1,480 was being cited as a potential entry point. Of course, if the local currencies are moving then the local price is also significant.

Ahead of Diwali (the festival starts on 25th October this year), there has been some cautious optimism on the part of local Indian jewellers and indeed the local discount to the international price contracted slightly towards the end of September, implying that there may be some tentative interest building in the local markets.

If the technical picture breaks down, then the weight of money that could come out of the professional markets in a profit-taking exercise would take prices noticeably lower—and then (subject to consumer confidence, of course) the pent-up demand in some of these highly price sensitive nations could be unleashed.

“The fact that gold is so readily mobilised is one of the key reasons why it is generally less volatile than a number of other asset classes.”

The INTL FCStone Inc. group of companies provides financial services worldwide through its subsidiaries, including physical commodities, securities, exchange-traded and over-the-counter derivatives, risk management, global payments and foreign exchange products in accordance with applicable law in the jurisdictions where services are provided. INTL FCStone Ltd (IFL), INTL FCStone Commodities DMCC & INTL Asia Pte Ltd are a wholly owned subsidiary of INTL FCStone Inc (“INTL”). INTL FCStone Ltd. (“IFL” is registered in England and Wales, company no. 5616586. IFL is authorised and regulated by the Financial Conduct Authority (registration number FRN:446717) to provide to professional and eligible customers including: arrangement, execution and, where required, clearing derivative transactions in exchange traded futures and options. IFL is also authorised to engage in the arrangement and execution of transactions in certain OTC products, certain securities trading, precious metals trading and payment services to eligible customers. IFL is a category 1 ring-dealing member of the London Metal Exchange. In addition IFL also engages in other physically delivered commodities business and other general business activities which are unregulated and not required to be authorised by the Financial Conduct Authority. Trading swaps and over-the-counter derivatives, exchange-traded derivatives and options and securities involves substantial risk and is not suitable for all investors. The information herein is not a recommendation to trade nor investment research or an offer to buy or sell any derivative or security. It does not take into account your particular investment objectives, financial situation or needs and does not create a binding obligation on any of the INTL FCStone group of companies to enter into any transaction with you. © 2019 INTL FCStone Ltd. All Rights Reserved.