Many of the charts are losing downwards momentum, with falls giving way to more lateral movements. This might be the start of a quieter sideways period due to lack of interest, or it might just be a pause because the recent bout of selling has been exhausted – for the time being. Optimists might see it as as turning point but it is too early to know.

As strange as it may be to suggest it, the falls over the last 6-9 months should not be seen as game changing. Yes, they have been painful, but it is more a case of money being deployed elsewhere rather that fundamental problems. The game is not over; it is just an extended recess. We are waiting for a reason to be buying again, rather than buying just because share prices are weak. This bear market in mining stocks just like a drought. We know it will end, but we just don’t know when.

There are plenty of good stories out there, in what should be seen as a buyers market, but only the brave are buying. From my own perspective I am happy to accumulate shares in stocks that are clearly oversold. I don’t know when they will turn around, but in the meantime I’m buying at the right price.

An example of strategy at the bottom end

One company which will remain anonymous for obvious reasons, is capitalised at about $3.5m with $2m in the bank as at 30/6/18. Its exploration programs have been unsuccessful – at least the grades have disappointed the market. It has good management and good geologists, so I expect they will farm out the existing projects and pick up new ones with more exciting potential. Depending upon what they are, and how much enthusiasm they can generate in the market, the share price could easily jump from circa 3¢ to 10¢ plus. Yes, it is a bit of a gamble, but that is how you have to play the penny dreadful end. Getting in cheaper than everyone else is a good start, and then you just have to be patient. It is as basic as A, B and C.

Even though I am suggesting reasons why I am buying this stock, the reality is that whatever you purchase today will be worth much more in 6-12 months time. Though once again, there are no guarantees; just an opportunity to have a punt.

Recall that Santana (SMI) was previously focused on a Mexican silver play that demonstrated potential to host 100 Moz of silver at 80-100 gpt Ag. Despite a few drill programs that confirmed this potential, the share price suffered due to a lack of market interest in silver. Rather than flog a dead horse, SMI shifted its focus to gold, identifying a high grade quartz vein project in Chile. It has just reported results from its first 10 hole program.

Three of the 10 holes were duds. The first six holes were designed to test quartz veins mapped and trenched at surface, at depths of 60-75m. However, there seems to have been some displacement of the targeted veins, whilst minor mineralisation was found in other locations down hole. This was the wildcat part of the program.

Fortunately the final four holes delivered much better results, with these testing the previously identified main vein. The best intercept was 12m at 8.1 gpt from 9m down hole. Next best was 16m at 3.5 gpt from 25m. The remaining two were 7m at 2.8 gpt and 1m at 2.6 gpt.

So, there is gold there but as is usually the case, the geologists need to go off and interpret what these results mean. It is still a very small sample size so it is difficult to draw conclusions, except to say there are not yet easy bonanzas to excite shareholders. Watch and wait.

We have added Jindalee Resources (JRL) to the chart coverage.

Sentiment Indicator: There was a slight improvement in sentiment over the week, with 14% (12%) of the charts uptrend and 60% (61%) in downtrend on Friday’s close. 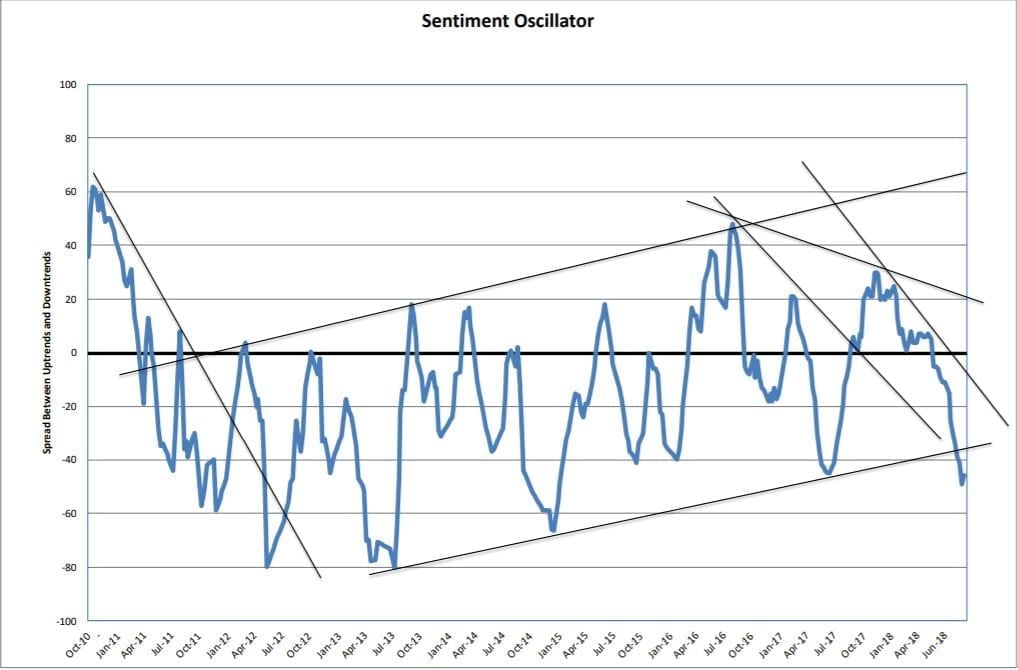